Your EDM Interview With Flosstradamus, On Dillstradamus, HDYNATION & The Future Of Trap

Dillon Francis is one of the most visible figures in EDM these days; Flosstradamus is one of the strongest artists in trap music. Together, they combine to form Dillstradamus. As I learned in my interview with Curt and Josh, the Dillstradamus show first started back in 2012 when they would perform at afterparties with Dillon, and it just grew.

Now, they’ve just finished up back-to-back sold-out dates at Los Angeles’ Shrine Auditorium and they’re preparing for their next show way off in December. But before their show on Friday, I was able to catch up with Flosstradamus backstage and learn more about Dillstradamus, HDYNATION, and their thoughts on the current state of trap music.

How did Dillstradamus happen on Holy Ship!?

I think Gary from Hard Events wanted us to do it, and he was just like, “You guys want to do a Dillstradamus set?” Because he was known about us doing it a few other times so, yeah, we did it there, and it was awesome. It was just us freestyling, having fun.

Cool. Well, I know for this particular set of shows, you’re doing kind of co-headlining and then you’re doing a little bit at the end of Dillstradamus?

So why not a little bit more Dillstradamus, and a little less headlining time?

Well, we have three shows for this so we’ll see. Maybe the third one we’ll do something different. This time we wanted to do– we flipped a coin, so whoever won got to headline the first night, which we won so we got to headline last night, and then tonight he’s headlining. So the third one, we might do more of a back-to-back and the less of whatever. We’ll see.

It’s just never been that serious. It’s always just been something we just kind of fucked around with, so that’s sort of the vibe. It’s not like, “Oh, we’re doing something.” Like, “This is Dillstradamus. We’re going to do a massive tour.” Every show that we do, we call it a Reunion Tour [laughter] because it’s usually like a year or two between that and the last time we even did it. So this is just a good chance for us– an excuse for us to get together and hang out with your buddy.

Very cool. And you guys are bringing your stage production here tonight? The–

–the bunker. How do you guys come up with designing that?

Well, it’s just we started off by doing an in-person version of our headquarters, basically, for Hoodie Nation. Hoodie Nation for us is just a fanbase name, but we like to get creative with shit, and so we were like, “All right. Cool. We’re a real nation. We have an army. We have a following, all this, so let’s give them a tangible place.” So the Hoodie Nation Tour, we built a sort of rough warehouse. It looked very DIY, very militia style, put together by random scraps and bits of metal. And now that we’ve got a bit of stronghold on the scene or whatever we’re doing with that– 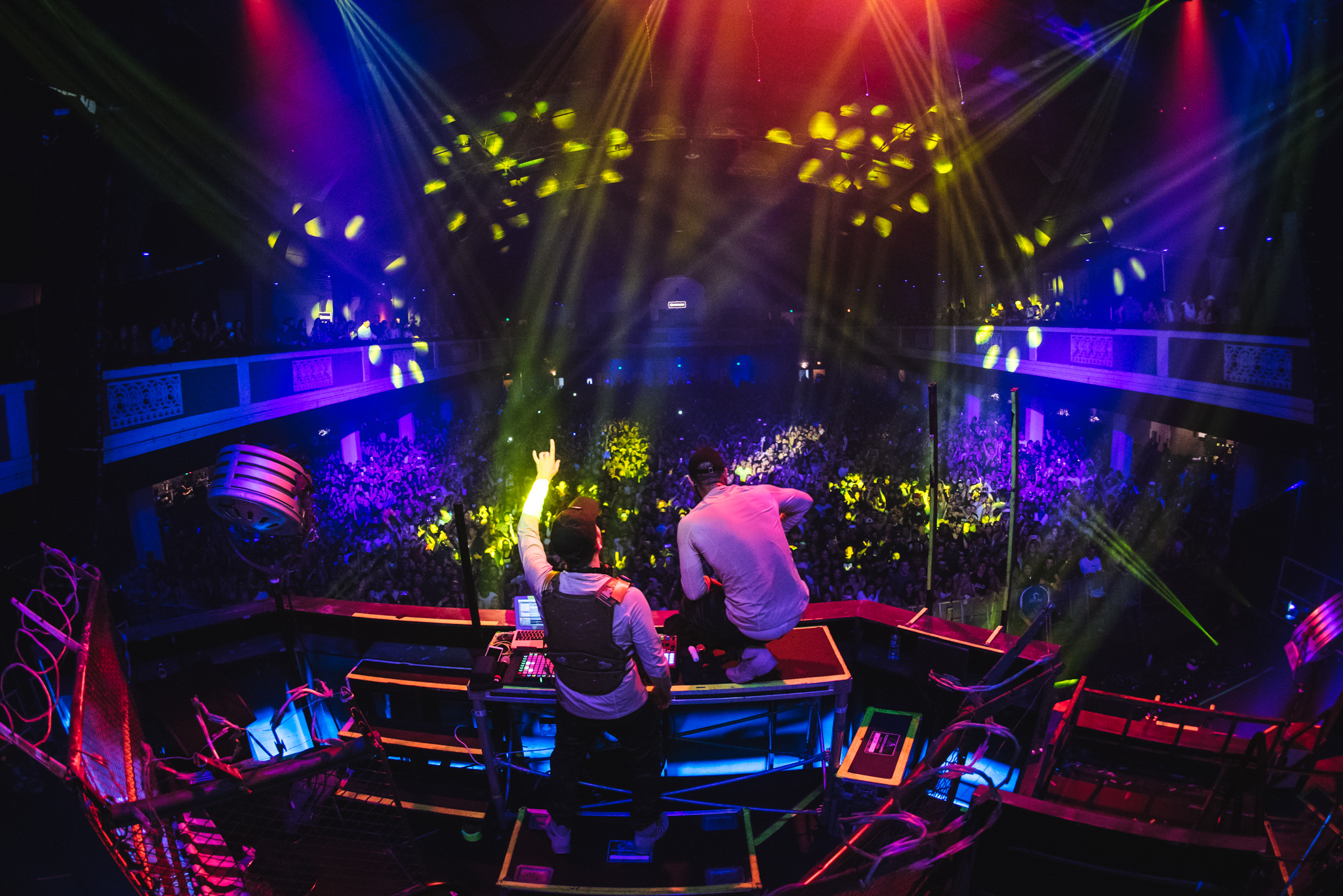 And a budget. [laughs]

Yeah, and a budget, we’ve blown it up a little bit so the bunker’s a more solid concrete piece of that and it’s huge. So we’ve just kind of grown and grown, and we like the production to grow with us.

Very cool. Speaking of HDYNATION as well, you guys have one of the most die-hard fan bases in EDM, especially with all the merch. When somebody walks by with the HDY symbol on their clothes, you know that they’re a Floss fan. So how have you guys helped to cultivate that fan base? Is it by interacting with fans? Is it by releasing special limited edition merch? Anything like that?

It’s been natural. And to take it back a step, yeah, they’re a fan of HDYNATION, a fan of Floss, but I think wearing that symbol means more than just us and them. It’s became its own thing. The people who represent HDYNATION are fans of hip-hop music. They’re fans of EDM. They’re fans of all different types of music. It isn’t just us. I don’t know. It isn’t a forced thing. Everything has just been natural with all of this. Honestly, the whole branding and shit is a thing that’s new to EDM. For us, we were just making T-shirts, and making clothing, and talking to our fans on the Internet, and it became this fan base. It wasn’t like, “Okay, we need to call it something. We need to call it the blah blah blah. Or the what? The Flossy Boys.” It was like, “This shit just happened.” It’s all natural. And that’s why everything’s been in our career, and that’s the way we keep it. Everything is natural, and you can experience it. We’re not the average EDM act. We’re natural, just dudes with swag. And that’s what everyone comes out for [laughter].

That’s so true. Oh man, that’s great. So I know you guys have already performed a couple big festivals this year. I saw you guys on Hard Summer. What’s been a standout performance for this year?

Lollapalooza was a huge one. It was in our hometown of Chicago. We were able to headline. We were also the first DJ act to ever play Lollapalooza. Back when Perry Stage was a little tiny stage with a folding table on it in 2007, I think we played it. And this was before DJs were a thing. We did it that long ago and now we are able to headline it, and it was like seriously the icing on the cake for our career.

That was pretty awesome.

Let’s talk a little bit about trap music. How do you feel about the direction it’s going in as far as your own productions, or where other people are sort of taking the genre? Do you see it as getting a little stale, or there are certain producers who are more creative and kind of pushing the genre forward?

Yeah, I think that’s with everything outside from trap, too. Music is always evolving. But to answer within trap, yeah, it is evolving in its own way, and even for what we did with trap when we first started doing this, we took what real trap music, like southern trap music was, put our spin on it, and our first releases to what we’re doing now are totally different sounding. And if you don’t evolve, you will be left in the dust in a way. So there’s nothing wrong with evolution, and I think the music right now is awesome. I’m super inspired by the younger producers, but I’ve been that way ever since I’ve been into music. There’s always younger people pushing music forward. So whatever direction that goes, I’m down to follow and down to listen to it. If I don’t fuck with it, I don’t fuck with it just like anything.

I was really impressed by your latest track with Post Malone and Graves, “Came Up.” How did you guys get like all those people together and just kind of put that one out?

I’m going to say, we worked with this dude, FKi 1st. He’s doing the produces and a lot of stuff with Post Malone. And so we’ve just been friends with him forever. We’ve always made music, and Post DM’d us on Instagram, and was like, “Yeah, we should make a song.” Because he just knew us through the family or whatever. And we’re like, “Yeah, let’s do it.” We got up in LA, we tracked a bunch of music in LA, and we made like three or four songs, and that was one of them, and, yeah, just went from there. It was easy. We ended up having an original demo for Came Up, and then Graves set us up to collab on some stuff. Actually we hit up Graves, started working with him, and we just were like, “Hey, we got this unfinished version of the song.” And he put his sauce on it, and that’s what it became.

Very cool. All right. So last question. As far as what you’re bringing to the Dillstradamus shows, is it any different than what you usually bring considering that you’re playing with Dillon Francis and doing it back-to-back? Do you craft your sets a little differently knowing that you’re going to do that back-to-back at the end?

Tonight, yeah, a little different. Like last night, we got kind of went a little more hard at the end of set. And tonight, I’m going to kind of chill it out a little bit more before Dillon, just so it isn’t like super moshy right before Dillon goes on. I don’t know. Just a little bit. Just a little change up, but nothing too crazy. We were Floss and we’re known for doing what we do. So keep going in.

Your EDM Premiere: Bronze Whale x The Odds – Call Me Out [Free DL]