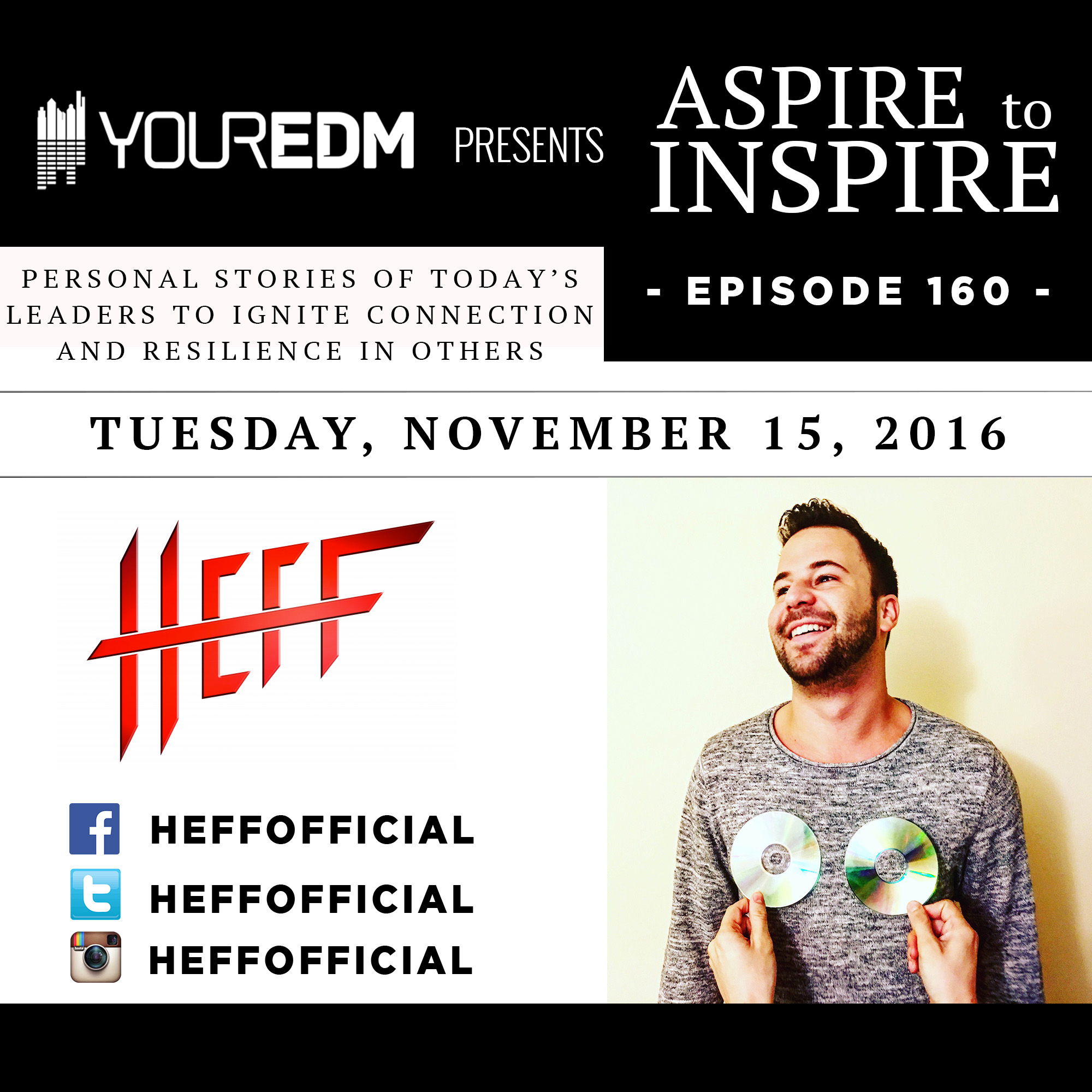 At a young age, Jason Heffler, aka HEFF, dreamt of one day playing in the Major Leagues as a professional baseball player. His interest soon shifted to writing however, and began to focus his skill and energy on the craft. At the University of Arizona, Jason continued his pursuit of writing, choosing English as his major. He wrote screenplays for fun in his spare time, and his knack for putting words on paper eventually earned him honors in creative writing. Above all, it was a tool that allowed Jason to beat his stutter, allowing him to clearly and thoughtfully articulate his ideas. It was a great equalizer that truly gave him full reigns to express himself.

In the spring of 2011, friends dragged Jason to Ultra Music Festival in Miami, Florida. He had no past experience with any music, and did not know what to expect with his first music festival encounter. By the end, Jason left blown away, feeling utter euphoria from the music and unique atmosphere he had just experienced. The defining moment of the weekend took place at Fedde Le Grand’s set, where Jason realized his newly developed love for this music would be a long-term affair. From that point on, he has never looked back, diving head first into the scene. Upon arriving at home from the festival, he immediately bought himself a small mixer and learned how to produce and DJ. Eventually, Jason realized that he could marry both his passions, by leveraging his writing chops to find a job in the electronic music industry.

Jason was determined after his revelation, and quickly landed an internship with Dim Mak, a well-respected record label founded by Steve Aoki. While there, he learned the intricacies of the business, as well as invaluable experiences working in the music industry. After his 6-month internship ended however, there were no full-time positions available, so he was forced to leave. Three months removed from his internship, Dim Mak contacted him for an opening on their PR team. Without hesitating, Jason took the job and rejoined the record label. He had landed a job practically made for him, and this is only at the beginning of what looks to be a long and fruitful career in the music industry.

Although Jason got the job he wanted, the road getting there was not always the easiest. In college, he had to make a presentation in front of a large lecture hall style class. While presenting, he froze on the spot and could not formulate any of his words. He felt like he was in a movie, where time slowed down and all he could do was helplessly watch. Embarrassed beyond belief, he came home that night feeling degraded and ready to give up on everything, including his music aspirations. His girlfriend was not for his pessimistic attitude, and told him that if he gave up and quit, she would end things between them. This alone was enough to fuel Jason who was madly in love with her and is still with her to this day. For Jason, this experience was an eye opening moment that made him appreciate the people around him, but to also never give up, even if there are roadblocks.

Jason would not be the person he is today without his parents. His mom, standing five feet tall, is the strongest and most resilient person he has ever known. On the other side, his dad is sharp and witty with strong business acumen. He claims to have gotten both their traits, shaping him into a thoughtful and well-balanced person. Moreover, Jason hopes to one day follow in the footsteps his parents’ generosity and philanthropic ventures. After his mom went through tough times before he was even born, Jason promised to give money to a children’s hospital. It is something that is very close to his heart and means a lot to his relationship with his mother.

Jason’s resiliency shined through in a time where he needed it most. Three days before his first big show at Life in Color, he decided that he wanted to perform with CDJs rather than the small the small controller he had grown accustomed to using. Although they resembled huge spaceships with an inordinate amount of buttons, Jason did not let this deter him and mastered the use of CDJs by the time of his performance. During his show, Jason felt at ease using the newly learnt equipment and put on a performance he will never forget. He had successfully accomplished this feat thanks to his resilient personality and never considered giving up as a result of his prior experiences.

Music has left a profound impact on Jason’s life. And through the creation of his own music, he wants to reciprocate by allowing others to feel the same euphoria he experienced at Ultra Music Festival. Jason had just finished a performance in New York, when he got an emotionally charged Instagram message from a girl who attended his show. She told him that her mother used to sing to her one of the tracks he played in his set. When he played the song, she became overwhelmed with nostalgia, making her sob uncontrollably. To Jason, this is what performing was all about. He wants to touch people and make them feel a certain way, and he came away that night successful.

Jason unearthed his two passions at a young age and was able to meld them together for a winning combination. He encountered roadblocks on his journey, but used them as a learning experience to grow and mature. Only at the beginning of his career, Jason is poised for a bright future whatever path he chooses to go. Always remember to follow your passions, and use any struggle encountered along the way as a learning experience to learn and improve.