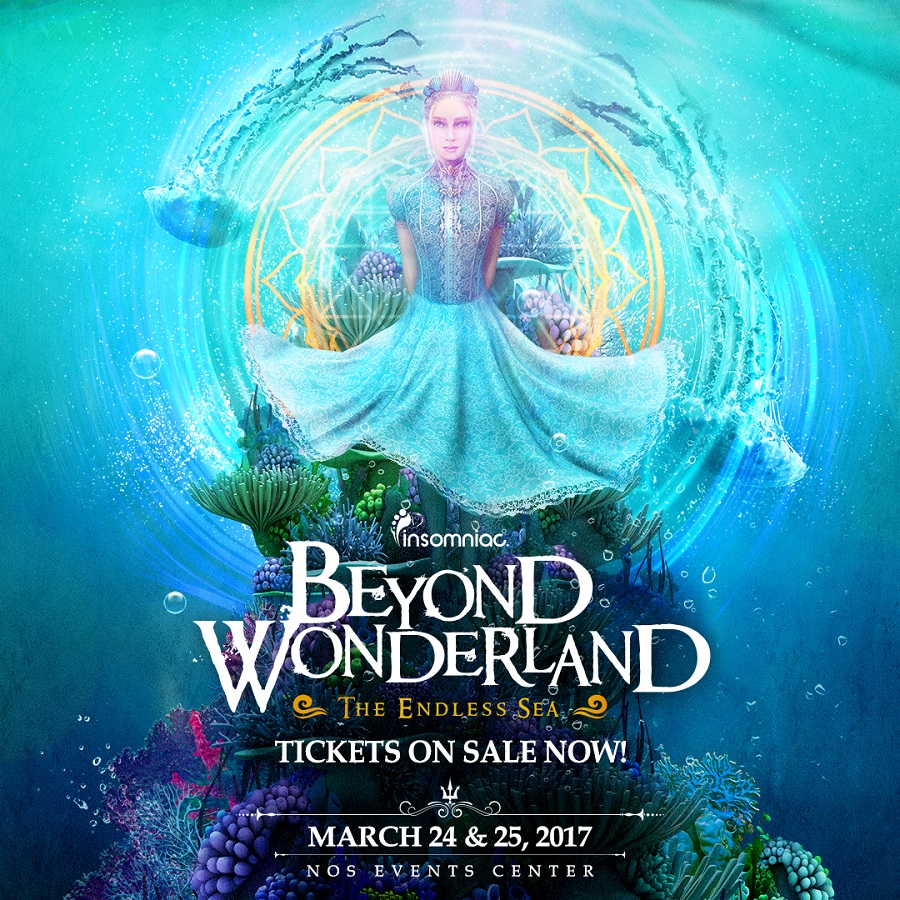 Today, two-day GA and VIP tickets to Insomniac’s Beyond Wonderland event officially went on sale at 12 PM PT. The whimsical weekend festival will celebrate its seventh installment by returning to its original home, the fan-favorite NOS Events Center in San Bernardino on Friday, March 24 and Saturday, March 25, 2017. Headliners can begin planning their voyage into the Endless Sea of Beyond by purchasing festival passes at BeyondWonderland.com.

This year’s festival takes inspiration from the beautiful allure, vibrant colors and exotic creatures of the sea. Beyond Wonderland will revisit the narrative of its modern-day Alice In Wonderland inspired character, who will dive into the mysteries of the deep-sea alongside the royal Queen and the loyal Fox. Alice travels through the key portal to the ethereal Endless Sea, where new adventures await this spring.

The transformative two-day experience will feature expanded production, adding a brand new stage to the magical grounds of Wonderland. The Queen’s Domain, The Outer Realm, Cheshire Cove, Upside-Down House, Boombox Art Car and the debut of The Aquarium, will feature six unique and intricate designs with eclectic performances from legendary dance music artists. Newly themed costumed characters, three-dimensional art installations, and Insomniac’s signature roaming art cars will submerse Headliners in the next chapter of Beyond.

Two-day General Admission tickets for the festival begin at $149 plus fees, while VIP passes begin at $249 plus fees for those 21 and older, available at BeyondWonderland.com/tickets.

Stay tuned for additional updates and announcements on Beyond Wonderland SoCal 2017 by visiting BeyondWonderland.com and following Beyond Wonderland on Facebook, Twitter and Instagram. To stay up to date with the latest Insomniac news, visit www.insomniac.com.