by Karlie Powell
in Tech

Listening to Spotify is about to get even easier!

As smart speakers become the new norm, Apple, Amazon and Google all have their own devices for easy music streaming. However, even with it’s commanding lead on the music streaming market, Spotify doesn’t have it’s own hardware yet. But that’s all (reportedly) about to change

The internet is buzzing with the notion that Spotify will soon introduce it’s own speaker. But unlike these other “home assistants,” the music streaming service is looking to tap into car listening habits. According to The Verge, an in-car music system is about to be introduced and an official announcement is nearing.

Apparently this will be a subscription-based service, which utilizes voice control while driving. It could be as simple as a tiny device secured on the dashboard (screenshot below via Forbes). Users would be able to secure the service for around $12.99 per month, according to reports.

An official “news announcement” from the company is set for April 24. So, just two weeks until we know for sure what Spotify is up to. We’ll definitely be tuning in to see what this is all about. 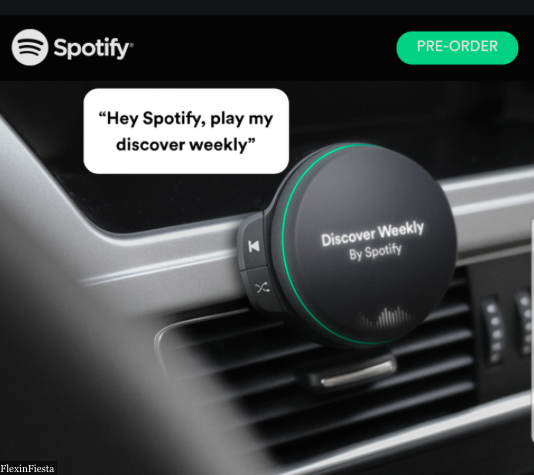