Electric Forest just dropped their full lineup for 2019, just days after announcing that the festival was moving back to one weekend next year. Headliners are made bold and noticeable right at the very top: Odesza, Kygo, Bassnectar, Zeds Dead, and String Cheese Incident. However, it’s the undercard that has us scratching our heads.

In the second group, we have a lot of return performers and fan favorites like 12th Planet, Black Tiger Sex Machine, The Floozies, STS9, Claude VonStroke, and Gramatik.

But moving onto the third group, we begin to see a lot more… interesting names pop up. There are some recognizable names in the group: Fury + MC Dino, Dr. Fresch, The Knocks, Ookay (Live), Riot Ten, Thriftworks, and the like. And then you have another group of names:

Now, rather than some people who’d comment “Who” on a Facebook post and move along, I actually took the time to look these artists up on Spotify. Some are actually decently big, like Pigeons Playing Ping Pong; others are significantly smaller, like Dragondeer. None of them are what you’d consider typically “EDM.”

Then again, this is Electric Forest we’re talking about, so a certain level of wookness is expected in the lineup.

Another factor to consider is that perhaps I’ve gotten a bit spoiled by two weekends of Forest, and this lineup is considerably smaller than what’s been shared the past two years. With an objectively smaller array of artists to put on the lineup, it’s only logical that there would be less opportunity to create a lineup that would appeal to all fans.

However, apart from a couple handfuls of standouts and the regular returning names, the lineup this year is rather disappointing. Worth shelling out $200 for a cardboard box tent? I don’t think so.

Check out the full lineup below! 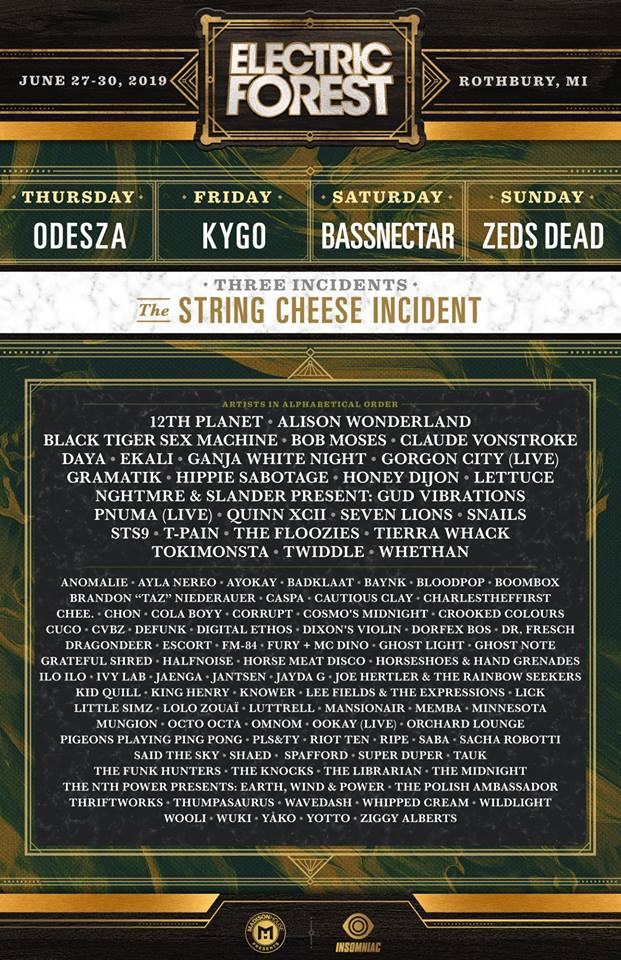