We give this festival four out of five cheese sandwiches

Rave Family Block Fest, pka Electric Blockaloo, the massive Minecraft festival that claimed to have over 950 artists and 65 stages over four days, is currently going through massive opening day bugs. The festival was called a Fyre Fest on Reddit almost a month ago, and now it seems to have earned that designation, though it’s only the first day.

Firstly, many users were caught off guard that there is no actual music in the festival. Though other Minecraft festivals have done it this same way, due to the scope of this one, it has many users who are new and unfamiliar with the platform and weren’t aware that music cannot be streamed through the game (at least not the vanilla game). Instead, users are required to find their desired stage in-game and then go to either Mixcloud or the festival’s website and stream the music there — for free.

While this was apparently laid out to users in an introductory email before the festival, many claim they never received the email or were simply misled from the beginning about what to expect.

All of this was compounded with an unexpected Mixcloud server maintenance this morning which resulted in the platform going down when the festival was scheduled to start, meaning that there was no music.

A second issue is with users even getting into the game. Unless you’re a seasoned Minecraft player or gamer in general or have been active in their Discord (which has been receiving complaints and inundated with requests for refunds all morning), accessing the festival’s servers is more than just difficult. The instructions for that were apparently also laid out in either the same email about music or a separate one, but the same issue persists: users either didn’t receive the email or instructions weren’t made easy to understand.

Two servers are active: Bedrock and Java, which you have to pay for individually. According to users in the Discord, there are currently (as of 12:15pm PT) 26 people on Bedrock and just 77 in Java. And because you pay for them individually, switching servers is like purchasing a whole new game. Meaning if your server is underpopulated, too bad. It’s unclear what the expectations for this festival were, but the fact that there aren’t even one ninth of the attendees as DJs booked on its first day isn’t a good sign no matter how you slice it.

Also, if you purchased the game to play on console, you’re out of luck. People unfamiliar with the game had no idea to know that you can’t join private servers from a console, only PC, so you’ll have to purchase the game again to enter the festival.

A third issue is navigation. Again, unless you’re a seasoned Minecraft player or gamer in general, movement in Minecraft, let alone from one massive area to another, is confusing at best and impossible at worst. Users are left stumbling around the virtual world or just succumbing to the location where they were spawned in-game. 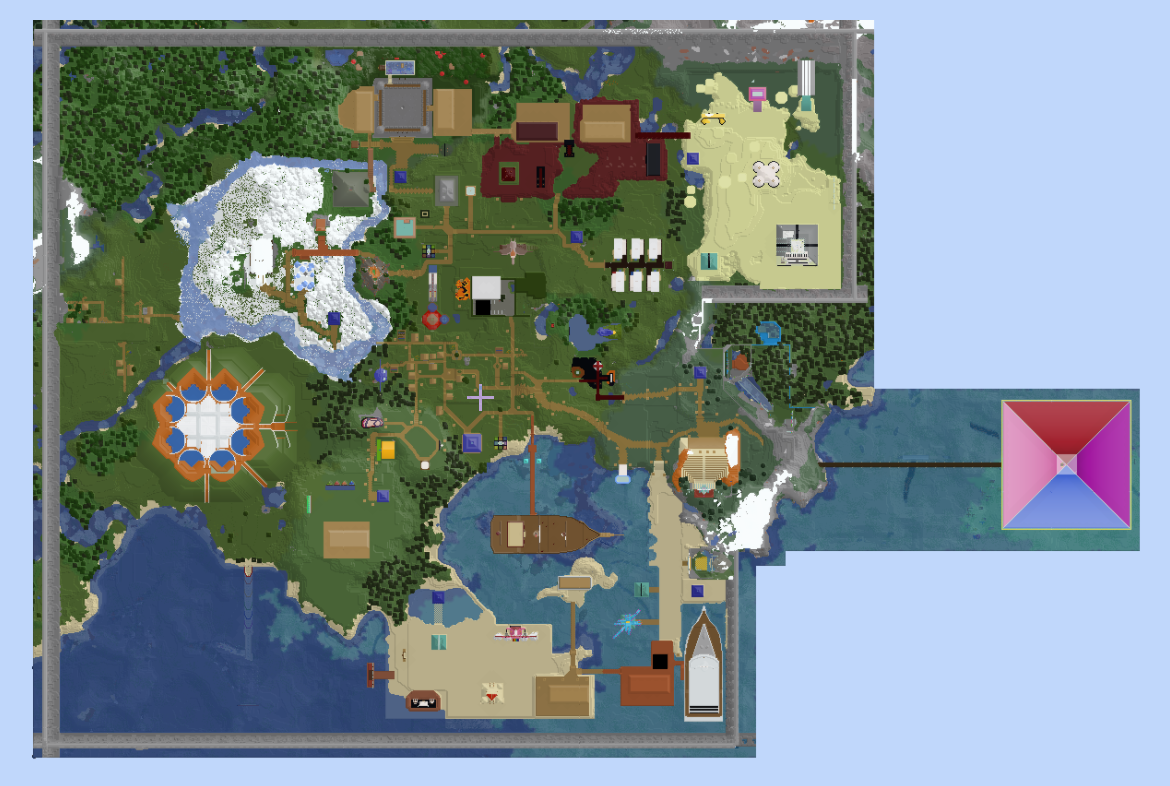 One of the admins in the RFBF Discord server shared this map with users, but it has no identifying landmarks or any labels whatsoever. When another user asked “how are we supposed to know which stage is which? by any chance could we get that labeled or will we have to do that,” he responded, “Sorry, if I had anything else to give you I would. That’s all I’ve got at the moment.” It only spells to the overall lack of organization and forethought from the festival which was already delayed two weeks due to a planned Minecraft update.

The functionality of the game itself is also experiencing major issues, with many users reporting falling down literal holes in the game and being unable to get back up, or getting stuck in “mosh pits” unable to move. No one can chat in the game, either, according to messages in the Discord.

Beyond the user experience, artists and management are being caught off-guard by the unpreparedness, as well. According to our sources, artist contracts had nothing in them about mixes being public. Avatars for artists were also supposed to be created by the festival team but as they were running out of time, told teams to create the avatars themselves or else there just wouldn’t be one. One manager reports that it took an hour just to create one avatar — again, there are over 950 “booked” to perform.

All of this doesn’t even begin to address how this festival is supposed to function on the mobile version of the game.

Overall, the festival overextended itself by leaps and bounds and took way too much under its wings. In pursuit of a larger than life experience, many details were left lacking or completely overlooked, and the users are paying the price. Or not — many have flooded the Discord server with requests for refunds.

A Mojang Studios spokesperson said, “Millions of people around the world use Minecraft as a platform to socially connect and express their imaginations in limitless ways. Rave Family Block Fest is not officially sanctioned by Mojang Studios and we have not partnered with organizers of the event.”

A representative for Mixcloud said, “Given that there is no legal and licensed way to stream music within Minecraft, the Rave Family organizers reached out to Mixcloud about using our platform to power the music streaming element of their event. As an open platform that supports all types of creators, Mixcloud provided the same streaming technology for the organizers that we do for millions of creators around the world each month. Mixcloud has not been involved with the organization or promotion of the event.”

Your EDM has reached out to representatives of the festival for comment but have not heard back at time of publishing.

You can listen to most of the sets as they’re uploaded, for free, here.

updated with statement from Mojang Studios and Mixcloud

Spotify Adds ‘Appears On’ Section Back To Platform

Spotify Adds 'Appears On' Section Back To Platform