Following this article today, TomorrowWorld released an official statement on their Facebook page that seems truly sincere and heartbroken at the events of this weekend. Of course, no one would be happy with how this weekend transpired, but earlier reports of a now-debunked statement from a PR rep seemed to show little remorse. 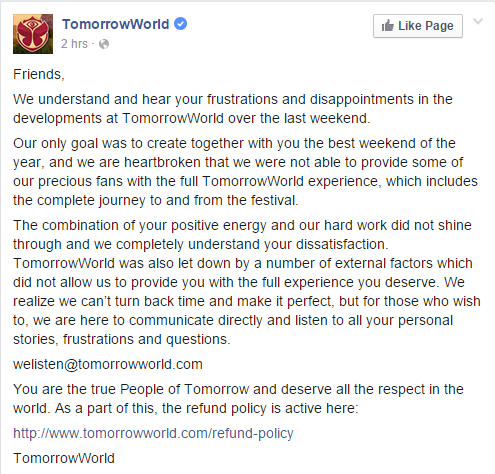 An email from Debby Wilmsen details the inaccuracies in HLN BE’s coverage of her statement. Please note that these words are, again, translated from Dutch to English by Wilmsen. If you speak Dutch and would like to hear the raw audio, you can go here.

After difficulties at the “outflow” on Saturday night (because of bad weather & mobility: trucks/cars/uber/taxis got blocked on parking, roads and drop off places because of the ‘sticky’ mud) the authorities & organization decided to inform all the guests that the festival on Sunday only will be accessible by those who are staying at DreamVille.

What happened with some guests? Because of long waiting times (shuttles/uber/taxi stuck in mud), people started to walk in the woods and on the roads and got lost on Sat night, and we are very blessed that everyone got home safe but again not so comfortable and with sore feet and only after a few hours when they were very tired. That was not nice and not comfortable at all!

The festival site of TomorrowWorld and Camping DreamVille were still in good shape (despite the rain) but still comfortable for the guests to dance, sleep, rave and enjoy the festival. Also the program/artists could play in comfortable conditions.

BUT all the parking lots, roads and drop off zones = muddy and dangerous for cars & shuttles – they got blocked and can also block the roads and that can be very dangerous for our festivalgoers on site. That’s why we and the authorities decided to limit the capacity on Sunday. We did not want to have situations where people were blocked on the road for hours or cars being blocked.

We are not concerned about our image or we do not want to ignore the situation, but we were concerned about the guests and the first thing we wanted to do was informing our guests on site and get everyone home safe. On Monday, we needed to do the “outflow” (not sure this is the correct word in ENG) of 40,000 guests at DreamVille and we were informing TomorrowWorld guests with our refund program.

Now we are evaluating for next year with organization/3rd parties & authorities & we would like to improve mobility plans. We are still very happy in the magical woods of Chattahoochee Hills. The nature/surroundings are beautiful. Atlanta = international hub. And we have a good relationship with local authorities.

This year’s edition of TomorrowWorld has been a PR disaster. For the most part, the majority of social media commentary on the festival has been negative. Many people who had positive experiences attempt to voice their own opinion but are quickly washed out by a deluge of one-day ticket holders who had to search for transportation in the dark.

While we still wait for official police reports regarding the festival, TomorrowWorld & Tomorrowland spokesperson Debby Wilmsen spoke to Belgian news site HLN BE, but it only seems like she’s interested in passing blame, rather than accepting it. If you’re looking for an apology, look elsewhere.

Text has been translated from Dutch to English using Google Translate.

“It is normal that the tents are wet when it rains five days. There you can as an organization not do anything. That people have far to walk, has to do with the size of the premises. The distances are simply enormous, even in dry weather they would have to step away. It’s no different in Belgium… Many people no longer wanted to wait and begin walking on their own, and they got lost in the woods around Chattahoochee Hills. It is rural America, there is no transport and who does not know his way, soon gets lost.”

“We have done the same as in Belgium. We have hay and wood bark scattered and some parts covered with mats. Chattahoochee Hills is a huge site, we can not completely [make] full set of ramps. It also just kept raining. You can put hay but it will at some point still [get] too wet. And you can not put coverings over 40,000 tents.”

“[The US media] focus primarily on what they see via social media visitors. It is also about a small percentage of the visitors… It’s not fun to read on social media how many people are dissatisfied, but on the other hand, there are many more people who have had a very good time.”

“This is anyway not pleasant, in the first place not for the visitors. But we have to take stock. How big is the reputational damage is difficult to estimate.”

Most of the criticism of the festival did not come from people who were unaware of the weather. From social media, many visitors were well aware of the impending rain, and were prepared with boots, ponchos and extra provisions in Dreamville. Those who did not park on-site on Saturday due to muddy roads were forced to shuttle or Uber into the festival, and were counting on that transportation to get out. When that wasn’t provided, that’s when shit hit the fan.

Wilmsen also claims that it is “about a small percentage of the visitors,” when she herself makes note of the 40,000 tents figure. That still leaves thousands of people over the weekend to deal with TomorrowWorld’s incompetence, which is by no means acceptable.

TomorrowWorld has a lot to answer for in the coming weeks, including a mess of a campsite; and there are still likely reports of sickness caused by the adverse conditions that attendees found themselves in. Capitulating and offering an apology at this time would have likely saved them at least a bit of face, but it seems they’re only interested in digging themselves a bigger hole.