Escape vs Day Of The Dead: Who Did It Better?

Say what you want to this LA kid, but there were only two festivals this past weekend worth attending: HARD’s annual Day Of The Dead and Insomniac’s Escape: Psycho Circus. Though Halloween is one of the biggest weekends for the electronic music industry, these two festivals have long and storied brands, and have proven that they can come back year after year to create unique experiences for their attendees.

This year, I had the pleasure of attending both festivals. However, as you might know, they overlapped on the weekend. So I chose to attend the first day of each, when everything was fresh, and the kinks might not yet have been worked out. And I’ll tell you straight right now: I’ve been to HARD’s DOTD since the beginning, but this was my first Escape. Even still, Escape was clearly ahead in some categories. Let’s take a look… 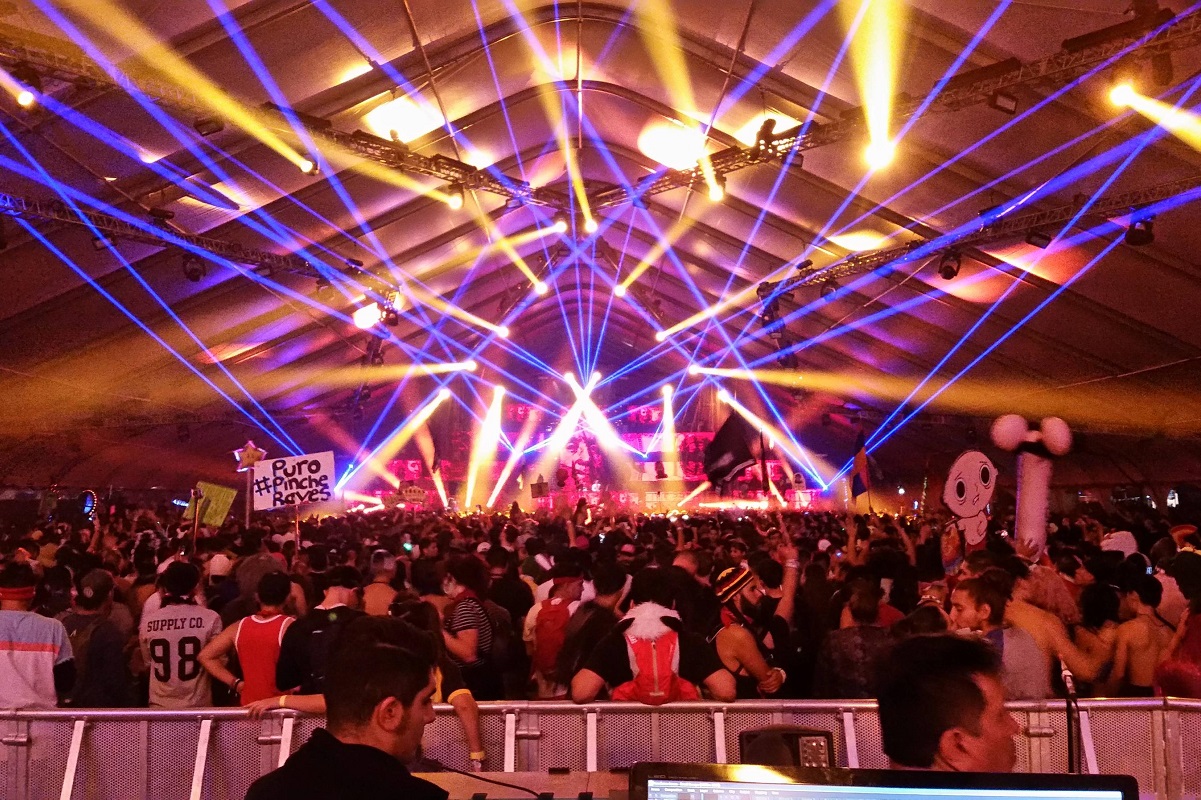 Stage production has never been a selling point of HARD’s festivals, though the stages have been noticeably less elaborate since leaving the LA State Historic Park venue in Chinatown. Yet even still, this year’s DOTD felt stale and phoned in. The stages were stuck in constricting warehouses, which stifled even further the creativity of the production and design crew in creating an immersive experience for attendees.

However, two of Escape’s stages were also in warehouse-like structures, yet managed to make full use of the space – including the ceiling rafters. Lasers, LED screens and strobes lit up the confined spaces and made you feel like you had stepped into another dimension. And Insomniac has been known for their stage production, so this is nothing surprising.

Lighting and design at Escape from SJ Lighting, with whom Insomniac has partnered with for years, created a magical space within the tents and warehouses. Technological advancement and desire from attendees for more intricate and impressive designs have been huge driving forces in developing more wildly imaginative production pieces. I was led around the grounds by SJ Lighting founder, Steve Lieberman, who talked me through the various stages and pieces. He and his team designed pretty much everything on the stages except for the design piece at the main stage.

If there was one thing that let me down the most this past weekend, it was the HARD Haunted Mansion stage. For those of you that don’t remember, HARD Haunted Mansion was the original name of HARD’s Halloween festival. It featured exceptionally magical moments, such as DJ AM’s appearance as Daft Punk, and even Deadmau5 fighting his clone and playing “Ghosts n Stuff” for one of the very first times. HARD said this year would be a return of the Haunted Mansion, but it was really just a few screens at the end of a long hangar. There was nothing special or memorable about it – there were no decorations adorning the stage, nor the sides. The artists who played there, the ones whom I saw, played their typical sets without much consideration for the time of year, and it was honestly pretty disappointing. 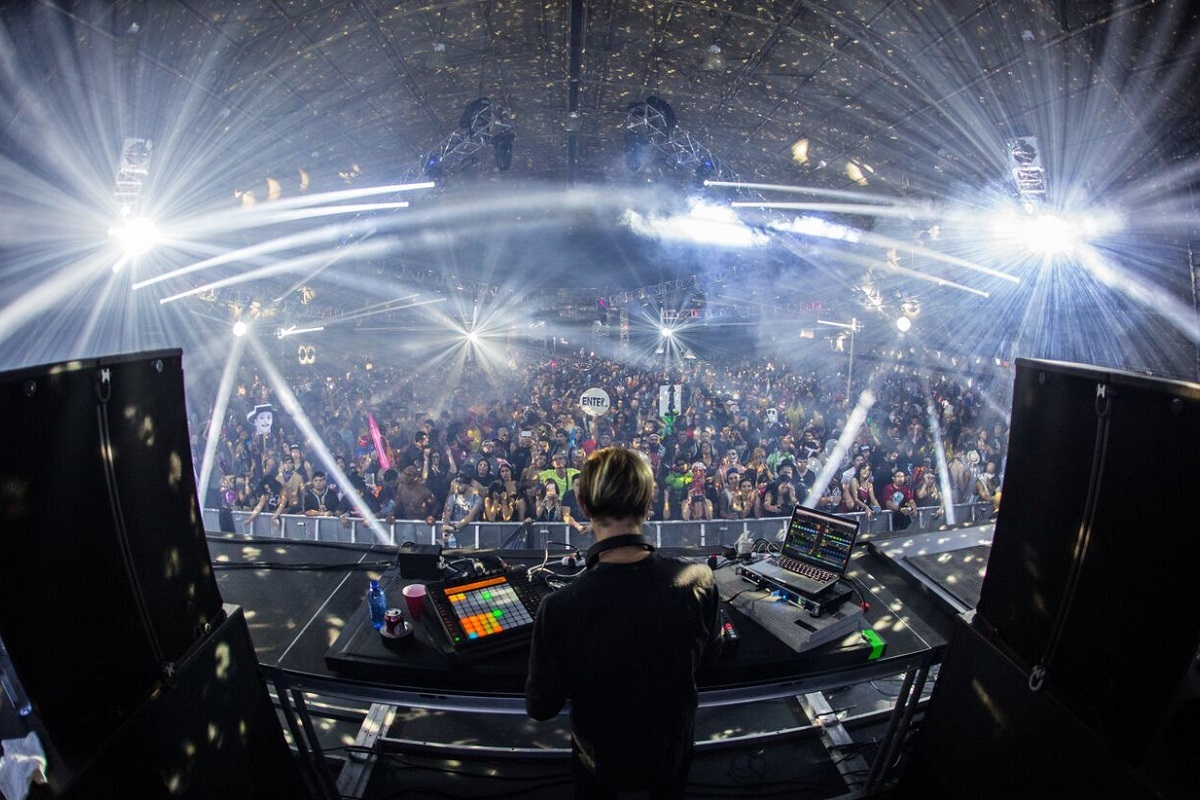 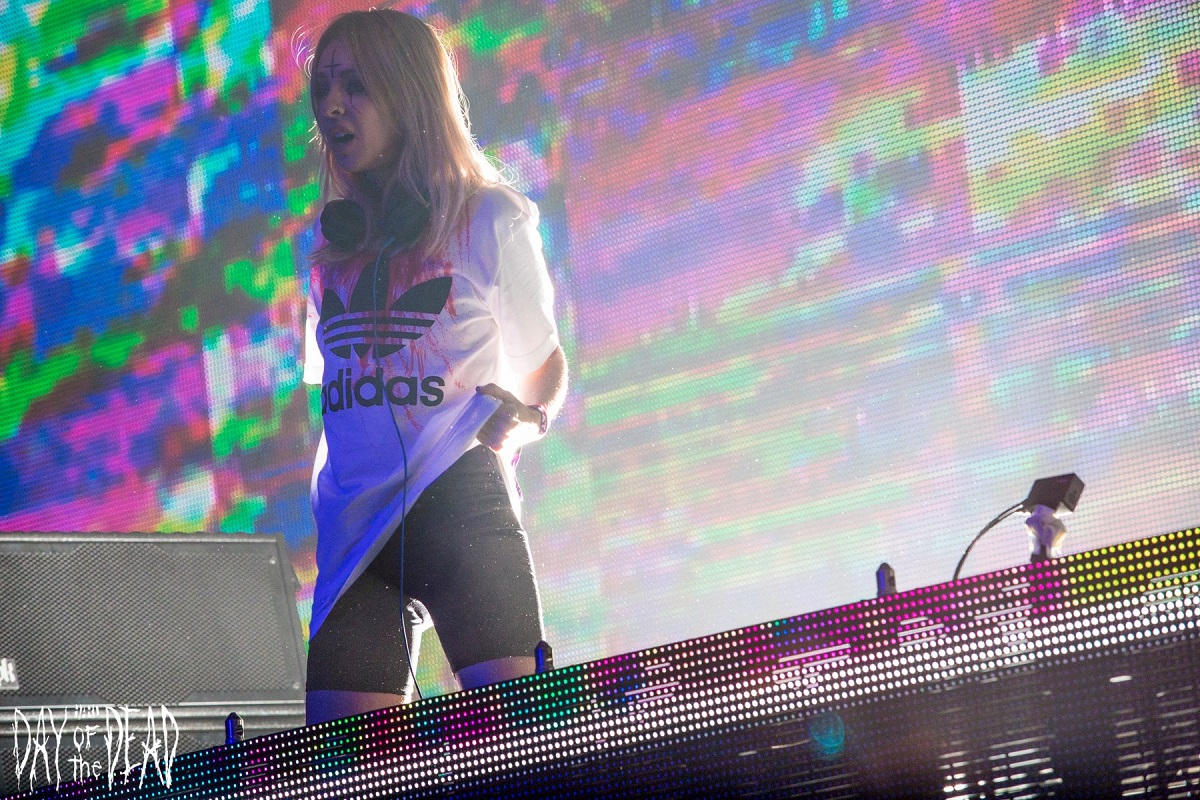 One of my favorite things about Insomniac is Bassrush, its heavier music division. Stacked with the best in drum & bass, dubstep, and trap, Bassrush events feel like home to me. Among the other, debatably, more mainstream acts at Insomniac events, Bassrush is often a haven for those of us who prefer headbanging and moshing to PLUR and kandi.

The lineup for Escape’s Bassrush on Friday was definitely admirable, featuring FuntCase, Excision, Flux Pavilion, and an epic three-part b2b between Ed Rush & Optical, Prolix, and The Upbeats. Datsik also dropped by to take over Bro Safari’s slot, as he was stuck in Austin due to severe weather and flight cancellations.

Big thanks to @datsik for stepping in for me tonight. Makes it sting a little less knowing you guys will get such a dope set from him.

HARD has never catered specifically to a single genre, though it has given deep house and techno a bigger presence, while leaving drum & bass almost out of the equation entirely. But HARD also does a better job of having a diverse lineup that isn’t just EDM – many hip hop acts like Future, Method Man & Redman, and Juicy J were present; and let’s not forget the electronica-adjacent acts like Hot Chip and Glass Animals. Rather than sticking to one stage at HARD, I found myself bouncing around trying to catch different acts.

Highlights of HARD’s first day included Nero, who ended their North American tour at the festival on a mild note, never really truly captivating the audience. (I’m speaking as someone who saw them at the beginning of their tour, as well, at Austin City Limits.) The biggest highlight of the night was Flying Lotus’s closing set in the Bone Shaker stage, which seemed to be the only one of the weekend that fully embraced the Halloween spirit 100% in production, stage design, and tracklist.

Both festivals were susceptible to crowd-pleasing DJs like ETC!ETC! and gLAdiator who played hits, but never really created a “set.” 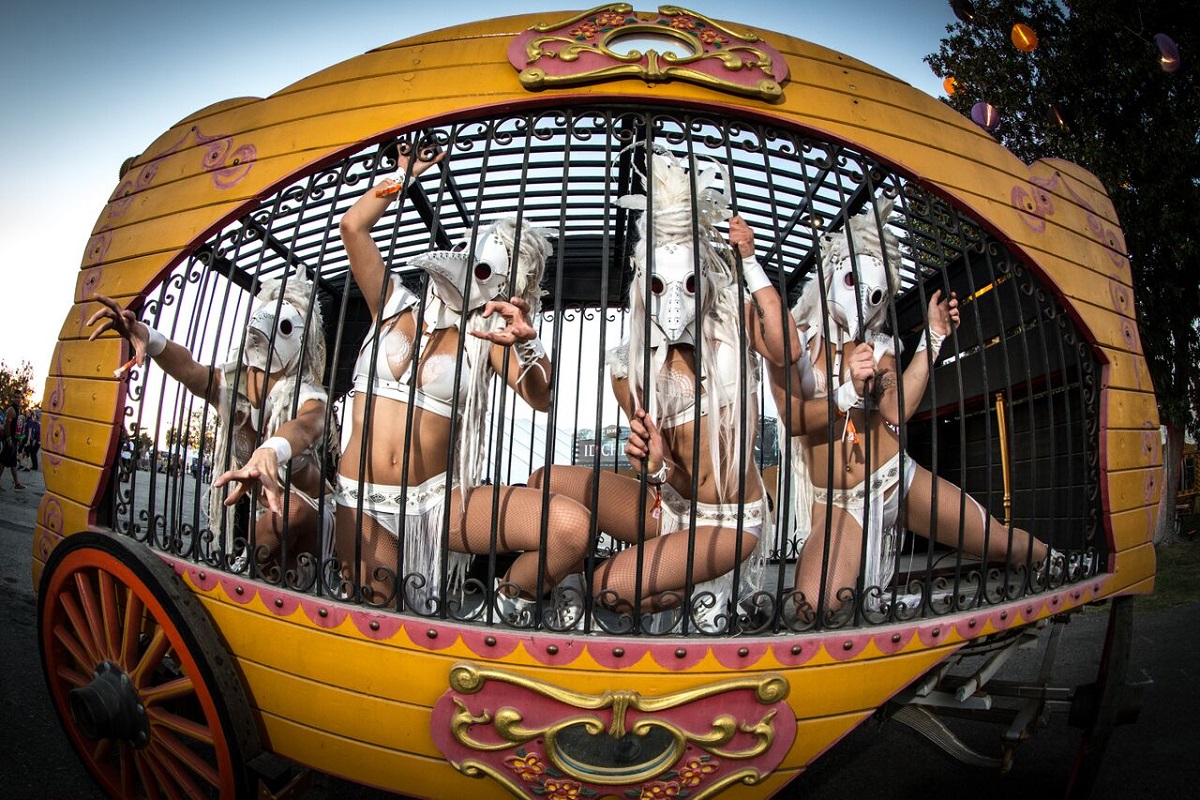 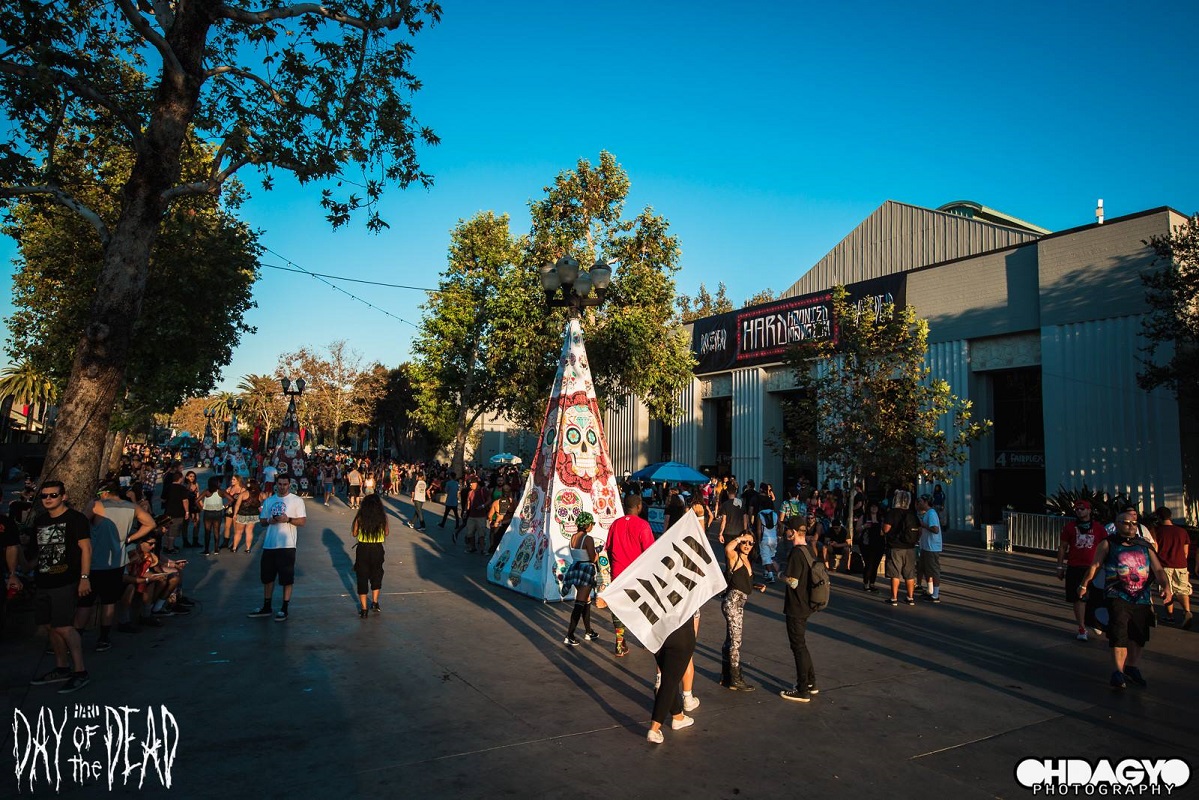 Overall, I expected a lot from these two festivals but was slightly let down by them both. Don’t get me wrong, I had a lot of fun.

But at Escape, even though the scenery and decorations were scaled up to 10, I somehow expected more. The haunted house was a nice touch, but Insomniac could take some directions from Rob Zombie, who created his own Halloween experience at the Fairplex back in 2013, and featured a real scary environment across the grounds.

As for HARD, I wasn’t even expecting much and I was still let down. It’s Halloween, guys. Live it up a little. Nothing about the festival, aside from the sparse skull decorations or the attendees themselves, let me know that it was Halloween. Festivals like Freaky Deaky, Pier For Fear, Something Wicked (if it had gone on as planned), and a dozen others with smaller budgets created immersive environments for their attendees.

Both festivals this year were affected by massive negative publicity surrounding EDM this year. From multiple festivals reigning in their last day due to weather, and others having to scale back because of ineffective security policies, neither promoter seemed to go all out this year.

Outlets like LA Weekly are reporting that as few as 20,000 people showed up to DOTD on the first day, and even less on Sunday, even though attendance was capped at 40,000. Alternatively, Escape was clocked at 46,000 and 49,000 attendees for its two days, respectively – and with a larger crowd comes more energy, but also greater traffic and difficulty moving about.

Both festivals had some stages reaching capacity: Tommy Trash at DOTD in the Dungeon stage was closed for a good 20 minutes toward the end of his set, while FuntCase was also closed for a short time at Escape. These enclosed spaces were literally keeping people from seeing possibly their favorite artist, and there was nothing that attendees could do about it until the festival security deemed it safe for more people to enter.

There’s a lot that needs to be done in Los Angeles for music festivals to recover, and a lot of it has to start with the local governments placing more trust in promoters. But that won’t happen until promoters can show officials that they deserve to be trusted. It’s a Catch 22 of the worst sense, and fans are unfortunately caught in the middle.

Hardwell Is Coming Back To The US For 4 Special Shows, Including The Return Of His “I AM HARDWELL: United We Are” Arena Tour

Hardwell Is Coming Back To The US For 4 Special Shows, Including The Return Of His "I AM HARDWELL: United We Are" Arena Tour