by Your EDM Staff
in EDM News, Featured, Worth Sharing

Google is useful for so many things! From finding the release date for your favorite artist’s debut album, or finally learning the lyrics to that song that sounds like two golden retrievers gargling basement water and spoons, Google is your best friend.

But one of the features that’s generally pretty useless to the layman is Trends: you can analyze mentions on the internet of a specific topic over time. Digital Music News has already done the hard work for us and searched a variety of genres over the course of the past decade. The results reveal that not only has electronic music been growing steadily since 2005, it is the only genre that has shown positive growth in the past 5 years. 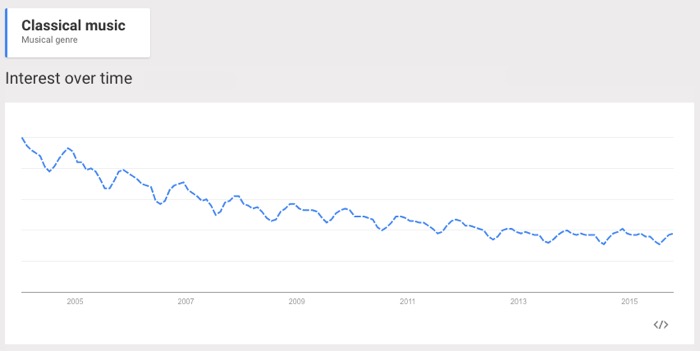 The only genre that has stayed relatively constant over the past 10 years is pop music.

However, it’s important to note that while electronic music has seen steady growth over the past decade, it has still not reached the level of popularity of most other genres worldwide. For instance, even when comparing a genre such as country to electronic music, the results are clear.

This does not mean that electronic music is any worse off – remember that numbers released from IMS earlier this year estimate the EDM industry at $6.9 billion worldwide. It just means that we still have some catching up to do.