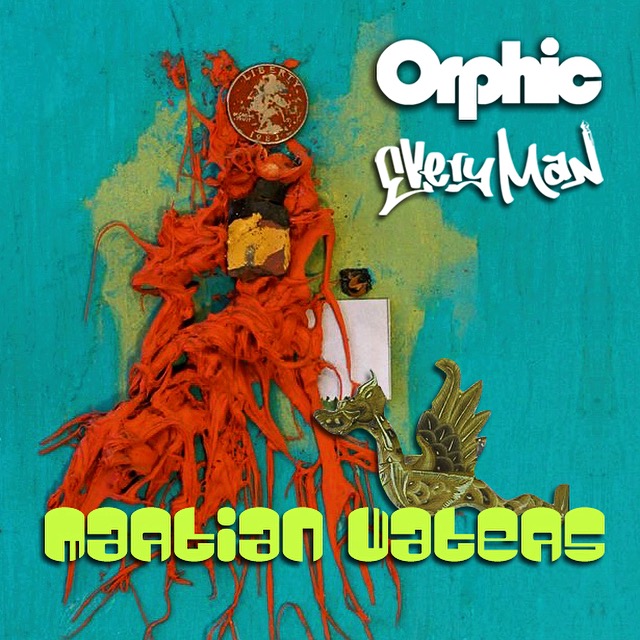 Winter is finally, finally here, y’all! And while we here in the Golden State don’t necessarily have to worry about the inclement weather, the temperature has definitely dropped a few notches. Luckily, Los Angeles beat-smith, Orphic, and Little Giants MC, EVeryman, have teamed up once again to bring you some funky-fresh tunes that are sure to have you wigglin’ until you’re warm and cozy.

Channeling funk, West Coast bass, and conscious hip-hop, the Martian Waters EP is a supremely cohesive 4-track journey through sonic similes and musical metaphors; think Fort Knox Five meets A Tribe Called Quest. EVeryman, as a self-proclaimed spiritual gangster, keeps his flow fluid throughout the album; utilizing alluring alliteration and unrestrained, socially-conscious lyrics, he makes sure the vibe is both groovy and forward-thinking. And on the production tip, Orphic doesn’t miss a beat. From the syrupy bass & breakbeat of ‘Bagga Funk’ to moving piano melodies and G-funk found on the titular track, this is music any West Coast head can get down to. Our favorite track is ‘Gotta Hook’, the release’s utterly explosive send-off. Check it out (as well as the rest of the EP) after the jump; if you’re diggin’ the tunes, be sure to grab a copy of your own on Addictech.

But, wait; there’s more! Orphic & EVeryman are going on tour in support of the album, so be sure to catch them live if you can; it’s always a spectacle. For the Los Angeles peeps, they’ll be playing at King King alongside Kaminanda and Kozmo; they are still looking to fill dates for the tour, so tell your local promoter to contact Sylvie Barnett if you want this goodness in your town!