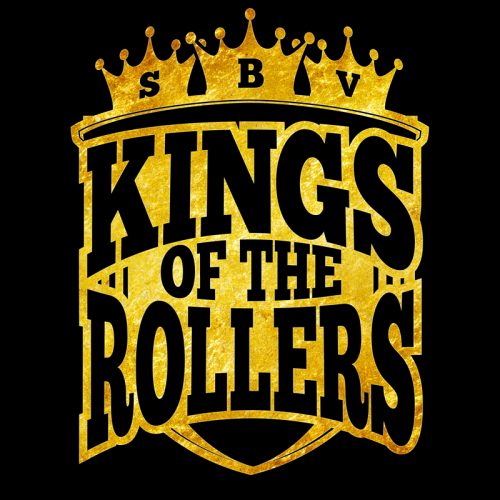 Your EDM Interview: Kings Of The Rollers

What do you get when you fuse three of drum and bass’s most lethal weapons? You get quite aptly… royalty. Kings Of The Rollers have most recently dawned a new era of collective individuality. By bringing to the creative table a plethora of their own intuitive abilities, they’ve branded a new mega- trio that have now championed a release on the legendary Hospital Records, while simultaneously securing international performances at some of drum and bass’s most festivals in the coming months.

While they each have quite exceptional solo careers, it’s blatantly apparent that something special happens when the trifecta of talent enters the room together. We sat down with the guys to pick their brain and get a sense of all things Kings Of The Rollers.

Hey guys! Sick to be having a chat with you guys. How goes it? Quite busy Iʼd Imagine….

Serum: Yes you could say that!

Voltage: Mental to be fair.

How did your combined efforts eventually establish a trio production group?

Serum: Bladerunner and I have been a double act since around 2009 and a similar thing happened over the last few years with Voltage. The three of us were booked for a Rough Tempo show and decided to do it as a three way back to back set and it worked really well. I asked whether promoters would be interested in booking the three of us on my Facebook page and it went crazy. I had the name Kings of the Rollers in my head and Voltage rang me up on the day of the post to suggest the same so it stuck.

Having three minds in the studio can be an intricate process Iʼm sure. How do your normal studio days go down? Is it an in-person thing or do you guys just send back ideas/project files?

Serum: We all like working in the studio face to face where possible and from working together before it’s pretty easy. Our general rule is to make sure we have a few ideas to begin with so we can get straight into it.

Bladerunner: Yes I think we all prefer to work in the studio together to get into the vibe. We do make intro ideas individually sometimes and send back and forth, so when we come together we’re ready with more ideas to fit the tracks.

Voltage: Yeah all in the studio together gets ideas finished quick , we all have the same mindset in regards to tracks so it flows well and things move quick !

2017 was quite a mental year. What are some highlights from each of you, and why?

Serum: The biggest show for me was Sector 6 at Boomtown. I’d done it the year before with Bladerunner and in 2017 we really took it to another level. It’s just amazing being up that high and seeing all the crazy things going on in the crowd. The guy crowd surfing on the airbed has become a bit of a legend (Good work Zayd!).

Bladerunner: Boomtown was definitely one of the highlights of the year for me too and Glastonbury was wicked! It’s just so great to be able to play the music we love to these amazing crowds!

Voltage: Defo Sector 6 & Glastonbury, gotta say though , the smaller gigs have had some mental crowd reactions

You have all three been in the drum and bass game with individual projects prior obviously, who are your individual inspirations musically?

Serum: There are loads but one thing I’ve always liked are artists who do their own thing and refuse to be told what to do. Kool Keith is a bit of a hero for that reason. On the Drum & Bass side it’s people like Ray Keith, Dillinja and Roni Size.

Bladerunner: Most of my inspiration comes from the early jungle music producers like Ray Keith, DJ SS, Roni Size, DJ Die and Dillinja. Before jungle I was into people like Michael Jackson, James Brown and Lenny Kravitz. I used to love playing the drums to those guys.

Voltage: I get a lot of inspiration from jazz and funk where samples are concerned I guess .. and hip hop a bit as well in regards to the drum sounds I like to hear … jungle dnb wise though defo people like Die , Roni Size , Krust , Ed Rush & Optical as well , and more lately Hazard.

How do your DJ sets go down? Is it planned or do you guys just bring to the table something as a solo artist that also fits the trioʼs combined taste?

Serum: The important thing for us is that we make it up as we go along and every set is different. We all have trademark mixes or routines but then we sometimes try to catch each other out.

Bladerunner: No it’s never planned, we bounce off each other when we play, which keeps things fresh every time. I think it depends on the type of crowd and how long the set is as well, if we have more time we can really go into the selection!

Voltage: Never plan ! We get into competition with each other too much during sets to plan anything hahaha.

What do you guys think of the current state of drum and bass as a whole? Do you think that it has lost a bit of itʼs ‘funkʼ and got too ‘clean?ʼ Or do you think maybe itʼs headed in a direction that the sort of ‘rawʼ undertones will really sprout to the top?

Serum: For me the scene is in a good place and I hope it stays like that. I’m getting music from a really wide range of artists that fit well into my sets and that means I can really take the crowd to different places. A few years back very few artists were making anything with a groove to it but that has changed now and a new generation of ravers is coming through that want something different.

Bladerunner: I think the scene is in a very healthy place at the moment, with so much good music coming out every week it’s hard to keep up. There’s still plenty of funk going on and the quality of production is so high at the moment as well. It’s great to hear so many new young producers sounding like they’ve been making music for many years.

Voltage: My favourite years were 96-99 until now … now we are as good if not better off for amazing tunes , and the standard is insane to be fair.

Sort of speak your mind and give some professional insight on the future of the genre based upon your experiences.

Serum: The future is hard to predict but I know I’ve got no shortage of ideas so there’s loads more to come. There are some great artists coming through like Bou and Benny L who I’m working with and supporting. If there’s any justice they’ll both be massive.

Bladerunner: I’ve seen a few cycles of this genre since 1994 and it seems to develop every ten years. With new talent being inspired by the last, so we are seeing a lot of young producers coming through now that have been inspired by our early work which is amazing! We’ve had the 2nd coming of jungle now, since we started the last resurgence 10 years ago. The new producers are coming through now with some crazy ideas, as they have 25 years of Jungle/DnB to draw from as well as all the other genres they have been listening to like Grime, Bassline and Dub step. It’s an interesting time as it could go down any route but I think it’s time for some darkness to come back into the music, like the early 2000 times of Ed Rush & Optical and Bad Company.

Voltage: Not sure but I can tell you that Serum is going to be in an asylum with patch cables around his neck wearing a gold cape.

Your tune on the SICK music compilation is well…. Sick! Tell us a bit about the process of how that came about.

Serum: My main contribution to this was the structure of the intro and the drums. I took the break that Voltage originally used and sat it more in the background. I made a sharper kick and snare that really cut through and another bass sound that comes in.

Bladerunner: When the guys sent over the intro and drop to me, I thought wow that’s going to be a crazy track! I added some sound effects and spread out the structure of the arrangement into a full track, then added the bass fills and subs.

Voltage: I made the foghorn of death on the slim phatty and ran it through some hardware .. got an idea going and sent to the lads to abuse

Lastly, are there any big plans for 2018 that you guys would be keen to share?

Serum: My label, Souped Up Records, has quite a busy release schedule for 2018 with tracks from Serial Killaz, Bladerunner, MC Bassman, Benny L and Bou on the way. There’ll also be a clothing line which is coming very soon.

Bladerunner: We have so many great shows lined up for this year already like Hospitality in the dock and on the beach in Croatia, Sun Beats Ibiza and I will be touring the U.S in march with the World of Drum & Bass crew. I’ll also be releasing tracks on my label Hi Resolution recordings throughout the year.

Voltage: We have ALOT of festivals coming up, looking forward to that , I’m also concentrating on my bodybuilding more.