Following widespread issues with nearly every facet of Rave Family Block Fest on its opening day yesterday, organizers have decided to postpone the event in order to get a handle on things and come back with a better logistical plan.

“What started out as a silly idea between friends morphed into something far larger than any of us,” the Rave Family statement reads. “[…] With that said, I can’t ask them, the fans who supported us, or the artists who put time and energy into creating this amazing event to continue to work under the level of pressure we currently are. It’s not fair to anyone involved to deliver a subpar experience and knowing what we’ve actually built versus what we were were able to deliver is heartbreaking.

“We have decided to postpone the event while still leaving our festival and camping open for the people who have been enjoying them for the last few days.”

One of the biggest issues of the event was lack of communication between the festival, its artists, and the fans. In a press conference with media this morning, Rave Family founder and CEO Jackie McGuire lamented that the idea the festival was a collaborative project between everyone involved wasn’t more clear. While it would be right to assume that the festival was handling all of the building and curation, the fact is that the artists built the stages, the labels curated the talent, and the users in Minecraft were almost solely responsible for creating their own experience. Toward the end when Rave Family was running out of time, they even handed over responsibilities of creating artist avatars to the artists.

Perhaps the most unfortunate thing is that the original concept for the festival is actually pretty cool: a collaborative world within Minecraft, created collaboratively between all levels of the industry, from the fans to the artists to the event staff. But that wasn’t what was conveyed in any of their promotional materials. And in fact, much of the press conference this morning was spent explaining things that should have been addressed in instructional materials and press releases before the event even began.

“I sincerely apologize to anyone who felt they were deceived,” the statement continues. “As we are able to let you into more of our worlds, we hope you’ll understand the level of time and energy by dozens of volunteer builders and other supporters that went into them. And to those volunteers, I am so very sorry that your hard word and time wasn’t showcased in the way it deserved to be.”

No date is indicated as to when the festival will be postponed to. Originally, it was meant to occur over four consecutive weekends, another detail that was left out of promotional materials and the event flyer itself. That was meant to spread out server usage and allow people who missed one of the 950+ sets in the Minecraft world to go back and experience them.

There isn’t anyone who can say that the idea, the concept of Rave Family Block Fest, was poor. It was a great concept from the beginning, just very poorly executed.

We hope that this experience doesn’t sour anyone to the virtual festival or Minecraft festival experience, as it has been done successfully in the past on much, much smaller scales.

Read the full statement below. 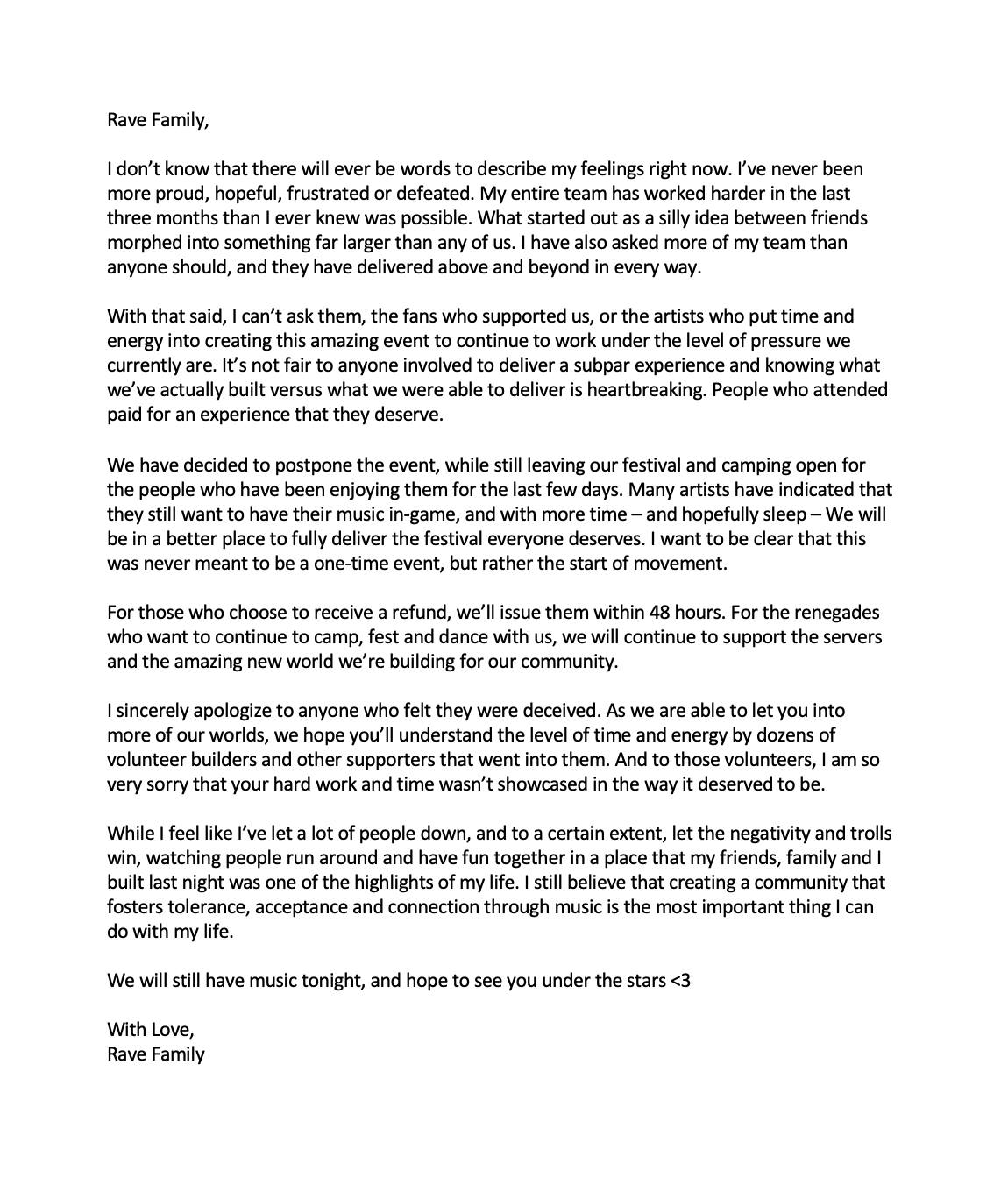 Electric Zoo Pushed Until 2021 As NYC Cancels All Large Events

Electric Zoo Pushed Until 2021 As NYC Cancels All Large Events