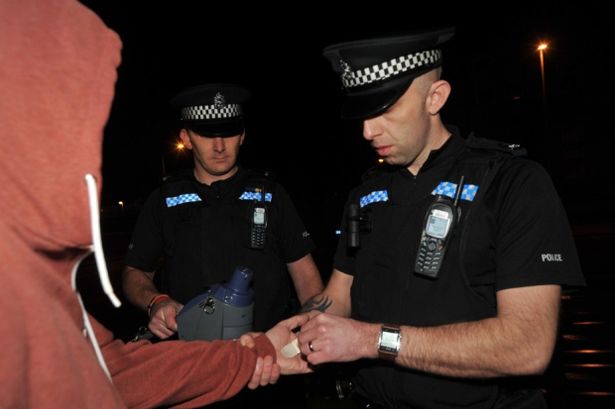 The war on drugs continues to subvert civil rights and liberties in countries around the world, and an operation in Scotland that targets people waiting in line for clubs carries serious legal implications. British news site Mirror posted a revealing news story on a Scottish police operation in which officers are performing snap drug tests on people simply waiting in line to get into clubs. Officers swab clubbers’ hands with a machine called an Itemiser to look for traces of drugs, and question and search anyone who tests positive. Clubbers who decline the test are refused entry into the club.

The operation escalated to a immense shakedown last weekend at Club Tropicana in the Scottish port city Aberdeen. Police used an itemiser and a sniffer dog to test 100 people over Friday and Saturday night. Many Scottish politicians criticize the operation, with Leader of the Scottish Liberal Democrats Willie Rennie giving the following statement on the operation:

“Carrying out such tests without a suspicion of a crime is a heavy handed and indiscriminate tactic by the police. It’s why we stood firmly against industrial scale stop and search. Police Scotland need to review this tactic and explain how this helps address drug taking.”

Ideally, the massive backlash to this operation would deter Scottish Police from continuing to target clubbers. Since many clubs in the U.K. play electronic dance music, it can be argued that Scottish police are also targeting EDM fans. The connotations of this persistent operation may very well plague EDM fans in Scotland in the coming months.