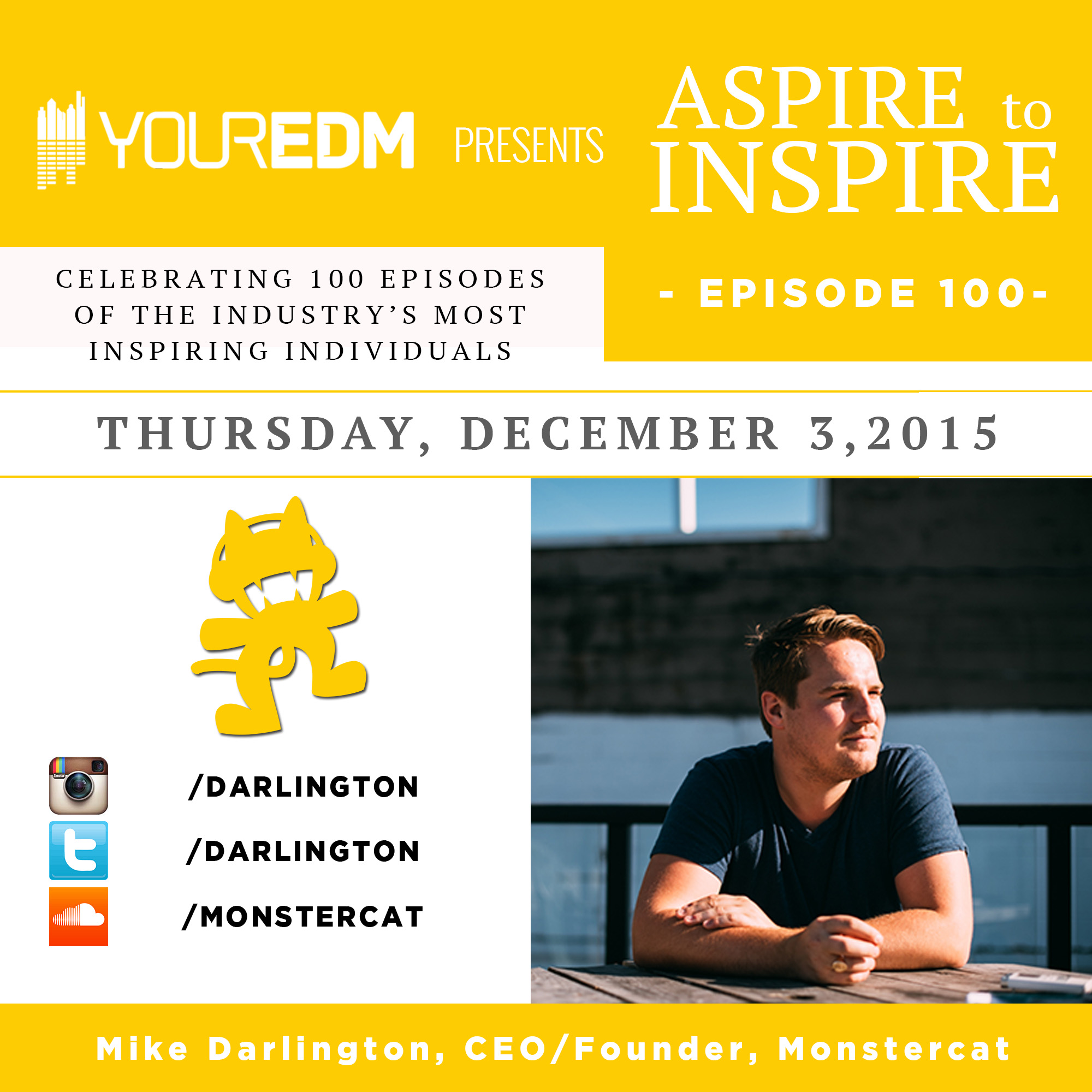 When Your EDM first began its Aspire to Inspire series, the goal was simple: take a deeper look at some of dance music’s most inspirational individuals. For 99 episodes, we’ve sat down with DJs, managers, vocalists, and others who have all had different paths that led them to their careers in dance music. For some, the road has been full of personal struggles – the death of a loved one, family responsibilities, addiction, etc. For others, the pressure to do well has resulted in emotional obstacles like anxiety and depression. But for each of the 99 episodes, there has been one common thread: each story ends happily, as the amazing people featured overcame their fears and setbacks to become some of the biggest artists and power players in the dance music industry. For our 100th episode, we wanted to highlight someone who not only is as inspiring as his predecessors, but also embodies everything positive about the dance music industry. That person is Mike Darlington, CEO and Founder of Monstercat.

While there are many larger than life personalities in dance music, Mike is both amicable and personable, traits that have been with him all his life. He wasn’t popular growing up, but still surrounded himself with people from different social circles and obtained good grades, despite lacking genuine interest in the material. His normal upbringing in Mississauga, Ontario was punctuated by sailing, as he went on yearly regatta trips with friends and taught others how to sail during his summer holidays.

Even at a young age, Mike possessed an entrepreneurial spirit. At 18, he created a micro startup selling maxed-out, retired World of Warcraft accounts to gamers who didn’t want to spend the time building their own characters. The business was so successful that he was able to pay for his entire university education before finishing the first term of freshman year. Though school was paid in full, it didn’t motivate Mike to focus more on his studies of business and ecology. His dedication to learning life’s lessons happened outside the classroom, so Darlington continued pursuing business ventures and learning more about the impact of social media marketing, which began to grow in popularity at the time.

Mike’s gift for thinking outside the box helped him to align with many influencers, especially in the tech world. He worked closely with tech review influencers on YouTube and aspired to take on a similar role for himself. This led him to discover music accounts on YouTube, specifically Mr. Suicide Sheep, UKF, and Liquicity. This new segment of music and marketing was the spark that began his best idea yet – Monstercat.

We really wanted to just come up with a weird name, something that came from the internet, something fun. If we didn’t go with Monstercat, it would have been Velocilobster.

Needless to say, Mike dodged a bullet on that one.

As Monstercat was still just a side project of hosting friend’s music on a YouTube channel, Mike was free to do other things, most of which still revolved around dance music. At this time, he attended shows three times a week, and played the all-important role of promoter – which almost everyone in the dance music industry can attest to doing in some capacity throughout their career – all while remaining at school. Like many who began their careers while studying, Mike was faced with a dilemma, as Monstercat took off during his 3rd year at school. At the request of his parents and from the guilt of spending three years in school, he finished his degree. Even now, Mike still favors real life lessons over systemic higher education, as evidenced by the multitude of Monstercat employees that held internships with the company before dropping out to work full-time.

Monstercat’s bond is one of the company’s most recognizable traits. It’s one of the few institutions that isn’t referred to as a team, group, or a collective; it’s truly a family. Mike runs the label with his business partner and best friend, Ari Paunonen. Ari studied Management Engineering in Waterloo where the two met early in University and became close friends, as they shared similar tastes in music, sports, and gaming. While Monstercat was still a blossoming YouTube channel, Mike worked 24/7 to complete a list of tasks. Now he’s able to do a better job of delegating the work to people who can do the job better than him. Recognizing his personal weaknesses and surrounding himself with people who can pick up where he leaves off also prevents Mike from becoming overwhelmed with the pressures of running a company.

As one might expect, Mike is faced with many challenges at the label, but he always takes time to focus on personal balance. He uses video games as his main method to de-stress, though every once in a while admits the simple task of cleaning his apartment helps him to refocus too. More than anything, he enjoys the outdoors when he has the time to do so.

At only 26, Mike has built Monstercat into one of dance music’s most prominent labels; a title he takes with a grain of salt.

I don’t want us to be just a label; I want Monstercat to be a place where creative people can come together and find inspiration.

And slowly, Mike is taking steps to ensure Monstercat’s lasting legacy. In addition to making music, the company does well to showcase some of the world’s most incredible artists, who make all the art for releases and compilations. Each creative element is another opportunity for someone’s art to shine through, which in turn helps Monstercat act more as an agency than a label. Where some labels serve as a just a tune factory, Mike has created a real community.

He has instilled both artists and his day-to-day staff with core values based on his own beliefs and personal experience as a member of the dance music community. Though he always has a lot on his plate, Mike has an open-door policy, and encourages his staff to always speak up and express their concerns. Most importantly, Mike wants to be as fair and transparent as possible with his artists, and makes sure each one understands the business of the dance music industry so they can focus on developing their art. This level of trust within Monstercat is what makes everyone so dedicated to its success, and why the company has a very low turnover rate among its employees.

As a label, Monstercat continues to raise the bar with artists who defy genres and industry status quos. As a company, there is evident passion to build a brand that doesn’t just excel in one area. Looking ahead, Mike wants to continue expanding Monstercat to help artists from start to finish, so that the imperfect systems within the industry can be replaced with something greater, that might not even be directly associated with dance music. Though his plate his full now, someday soon there will be more time for charity, specifically the Humane Society of Canada. After all, that’s the real goal of community – to use resources and give back, which hopefully inspires a new wave of people to do their part to change the world.

We at Your EDM hope that Mike Darlington and the other 99 episodes of ATI have inspired some of you to press on in your pursuit of your dreams. It’s been an honor to share the stories of some of our favorite hard-working heroes in the music industry, and we look forward to sharing 100 more stories with you. – Team ATI