April Fool’s Day this year was full of interesting pranks and jokes on the unsuspecting fans of electronic music. For our own part, we were able to trick some readers into thinking Avicii’s single leaked early, or that TomorrowWorld was returning this year (it actually seems to be next year).

One of the more notable pranks pulled this year was a fake Daft Punk concert at the Los Angeles Coliseum – it’s not exactly an original prank by any means, but it’s the sheer number of people who actually fell for it that’s concerning. Nearly 6,000 people have registered themselves as “going” to the event while another 39,000 say they are “interested.”

Of course, it’s unclear how many of these individuals actually “fell” for the prank, and how many are just going along with it, but even looking at the comments shows that a lot of people are quite angry. 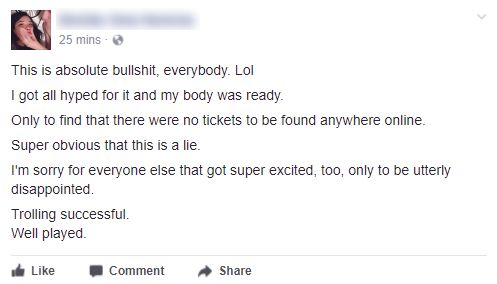 There hasn’t been a full-scale Daft Punk tour since 2007’s Alive tour, despite one-off performances here and there in the past decade, mostly at the Grammys.

While the time for the event isn’t yet upon us, we can safely say with absolute certainty that Daft Punk are not going to be showing up for this event.