Skrillex Confirms His Next Album Is Almost Finished [DETAILS]

Skrillex has multiple albums on the near horizon and his latest social media update confirms the “first album” is nearing completion.

“Starting final mixes on this first album…” he writes in the screenshot below, “loving how this is sounding.”

When he received a GRAMMY nod for his work on “Midnight Hour,” the producer also took to social media. “We would not be here if it wasn’t for you,” he said. But another vital piece of information slipped out — “I’m just in the studio finishing my albums.”

Skrillex went on to speak about at least one of the albums at this year’s GRAMMY Awards:

The thing is with this album, every single of piece music [unintelligible] been what I have right then and there and then it was run and gun. This is the first time I’ve really been taking my time, being precious about a few of these releases. But soon, man. I’m doing some videos, making some content, getting ready for these next records. […] I’ve never sat down and been completely tenacious about one of my releases like this.

The update below seals the deal. Keep your eyes locked on his Insta here for more. 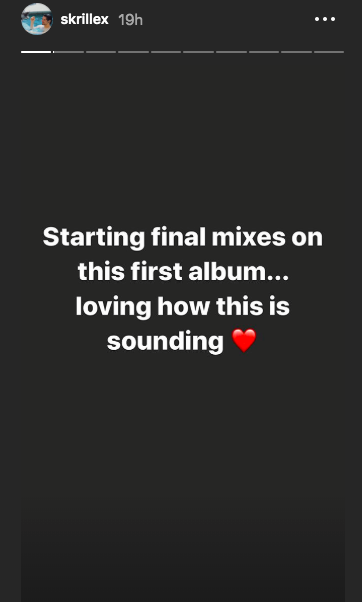 Lightning In A Bottle Unable To Offer Refunds for 2020 Festival