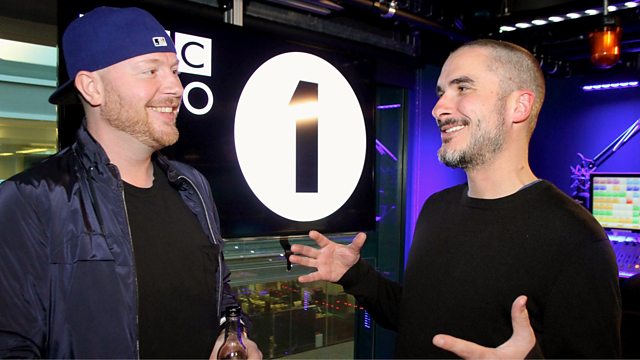 Eric Prydz Sits Down With Zane Lowe To Talk Production, Swedish House Mafia And “Call On Me”

Following on the heels of his newly released, debut album Opus, Eric Prydz recently sat down with Apple Music Beats 1’s host Zane Lowe to discuss his production process, his seemingly ancient hit “Call On Me,” and his near addition to the Swedish House Mafia trio.

In the interview, Prydz describes the creation of his album’s title track, “Opus”: although the song stands at nine minutes in length, he admits that producing it only took him half an hour! He goes on to speak about his own material in the context of more ‘generic’ festival tunes, as well as his avoidance of using mainstream vocals for his tracks whenever possible.

Finally, Prydz discusses his relationship with the SHM trio before their group was entirely formed. He almost became the group’s fourth member, he says, but decided to move to the UK and begin his solo tour instead. Oh, if only history could be rewritten.

Read a condensed transcript below, or click here for the full piece.

Z: How do you know a song is done?

E: Tracks are very rarely done. For me it’s always like, “What if I add that?”

Z: Have you ever been satisfied at the end of a session, where you’ve gone, “I really can’t add anything to that piece of music.” What’s the closest you’ve got?

Z: Come on, wait a minute. You did the whole thing in half an hour?

E: I needed a finale for “EDC Las Vegas,” when I did that. I was on the tour bus and I had the actual riff previously. I went through all these ideas because I have… whatever, hundreds of them. I was like, “Oh, yeah, I like this,” but it wasn’t finished. It’s only… I think it’s six bars. It’s supposed to be eight.

Z: Do you feel like an outsider when you’re playing festivals in some respects? I’ll qualify that question. Because of the music … We just described what you do, effectively, and yet so much of the music on these festivals and on these bills is, in my opinion, and I’m not trying to be insulting, I just feel it’s more linear …

Z: In some respects, and in other respects it’s like, what I do is energy, or what I do is this, what I do is that.” There aren’t too many people on the bill, I think, that are trying to press the emotional button. For me, I would liken it to going to a heavy metal festival and watching the Deftones. They really stand out because they don’t mind putting the emotion up front alongside the aggression.

E: I do think that a lot of acts, and a lot of DJs, these days, they will go with what they know works, and they’re going to take the easy road every time. Business-wise and for them as a brand, I think they see it more like a business. They’re going to go the route where they know 100% that there’s going to get a pay off. I don’t give a fuck, really. I will go and I play what I want, and some people don’t get it at all. Every show you catch a few of them and they’re like, “What the fuck was that?” That’s how I’ve been doing it.

You want to smash it, but I don’t really see myself competing against Calvin Harris and Tiesto. For me it’s different styles of music. Do you feel like that sometimes when you were on the radio? When you would come on after someone else has been DJing …

Z: That leads me to my question as well. I think a lot of your fans recognize that you’ve never been one of those DJs or producers who’s looked to high profile collaborations or high profile vocalists or anything of that nature. You’ve never peppered your records with anything that I think is there to facilitate a hit record or anything like that. You’re finding a way to lead the melody yourself. Is there a mentality behind that?

E: Yeah. The mentality is the track above anything else, and don’t try and compromise

Z: You must have been pressured though at times to put vocals on things?

E: Yeah. I had that with a very famous independent record company in the UK, where the head of the company actually came to the studio, like in the movies, with a briefcase stacked with 100 pound bills, the whole bag

E: Yeah. I knew that if I did that record in the way that they wanted to, I couldn’t stand for it. It wasn’t me anymore. It was something that would become a big hit. It would have probably been a number one record in the UK. I had it with other records as well, like “Piano,” which was an instrumental track that I made. It was number two in the UK as an instrumental track. Seal wrote a vocal for it that was amazing. Timberland did something on it as well. We had all these things. It took the track to a place where I felt I’m not comfortable there. It was a hit. It was a number one smash, but I was like, “No.”

Z: How much of that was a reaction to the fact that you had such a colossal hit record so early on in your career with the song “Call On Me,” which I’m sorry, to this day is a fucking tune. I think a lot of people think of that song as being a red herring. It was a moment where people thought of you in some way, but it wasn’t who you were. How did you feel when it was a smash? What was that time in your life like?

E: I didn’t expect it to be. When it was first getting traction in clubs and stuff, you had people playing it. It was something else. It was seven and a half minutes. It was another type of track, but then it got signed to a big record company and the edit was made and a video.

E: I liked the video but it’s not me. I didn’t have anything to say about it. They’re like, “You signed this. We can do what the fuck we want.”

For me, I’m super happy about “Call On Me” the single, and what happened to it, and that it became super successful and all that. I don’t take pride in the track, because Steve Winwood wrote the melodies in it. I added some beats, I changed the arrangement around, and somehow it connected with the audience. I’m happy it happened, but at the time I was on a different musical journey. This was just some side project that I did. It took me a half an hour to make, just a fun thing on the side. I already had my path with my labels and Pryda and the whole progressive house underground stuff and the techno with CirezD that I was doing. Then all of a sudden this happened, and I got a bunch of new Eric Prydz “Call On Me” fans that started turning up to the shows. I would open up with a John Mull record. They’re like, “What?”

Z: Do you still play it out?

E: Never, never. Last time was 2005. I was spit at, thrown glass bottles and stuff, and there’s a video clip of this. Eric Prydz gets booed in Canada in 2007 when I went there for my first tour. They were going crazy because I didn’t play “Call On Me.” It got so bad they had to come and get security to protect me. I didn’t have the track with me.

Z: Were you in Swedish House Mafia?

E: No. There was an early version of Swedish House Mafia that I might have been a part of. All of us living in Stockholm, we’re all best friends. It was just us hanging out all the time. All our studios were at the same place in the center of Stockholm. Then in 2004 when “Call On Me” exploded, I decided to move to the UK because I wanted to start touring properly and stuff like that. They continued and they took the name, and they made it into something else.

Z: It must have been interesting watching your friends you’d grown up with. Obviously you were firmly established already, so you knew your future was bright. I look at Swedish house mafia as being … they are like day one of EDM.

E: Yeah, I think so too, but they did it in a classy way. EDM is now … Then people didn’t call it EDM. It was just very accessible high energy party music. It came with the energy that they had, they just really work together. It was a good thing that I left, because if I was still there and I had a say in this whole thing, it would never have become as successful as it did. I was like, “No, dude, that’s fucking cheese. Don’t do that.” I would just destroy the whole thing. One of the best things that happened to SHM was that I just moved out of the country and they could just do their thing.