2015 spelled the end for TomorrowWorld and its promoter, SFX Entertainment

American ravers were ecstatic to have a Tomorrowland event in the US — TomorrowWorld, in Chattahoochee Hills, Georgia. Running from 2013-2015, it represented the best that the native Belgian festival had to offer, from creative stage designs to the wholesome atmosphere and community. Unfortunately, five years ago this past weekend, disaster struck when a massive storm muddied the festival grounds and effectively stranded thousands of attendees miles from the nearest ride home, let alone hotels.

“Friends, Today – Sunday September 27 – Mother nature has decided otherwise…,” the festival wrote in a statement to fans. “TomorrowWorld will only be accessible to visitors currently camping at DreamVille. Continuous rainfall over the last three days has severely limited capacity of the parking lots, entrance roads and drop off locations in and around the festival site. The experience of the TomorrowWorld visitors is always number one priority, so TomorrowWorld was forced to close all daily parking lots and drop off locations.”

The unfortunate reality that only attendees camping in DreamVille would be able to return for the festival’s final day was only the tip of the iceberg, however. The previous night, as attendees all but evacuated the grounds, some were forced to walk many miles in order to find ride shares to return back to their hotels. And, as one observant fan tweeted, though Uber and Verizon were partners of the festival, there was no service, let alone rides, at the pickup point.

Some drivers for Uber also weren’t shy about capitalizing on the situation — rather than picking up passengers through the app, they were glorified taxis at extortionate prices.

Those who couldn’t find a ride were forced to find shelter and rest along the side of the road, bringing us this harrowing image. 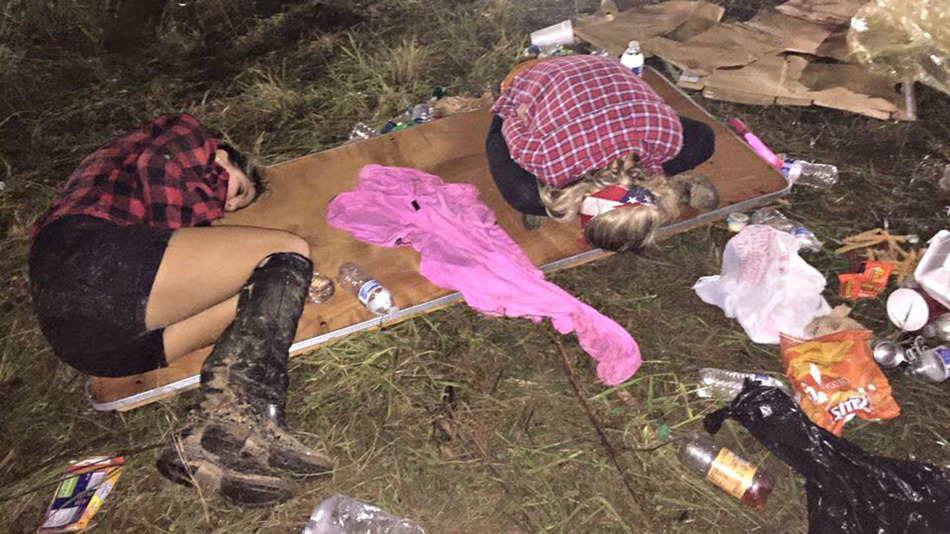 Earlier that year, festival promoter SFX Entertainment’s CEO Robert Sillerman was already exploring a potential sale. The month before the festival, its shares had plummeted, going as low as 91 cents per-share. The September event didn’t help its efforts to extend its takeover bid deadline in October 2015. By the following February, it had announced Chapter 11 bankruptcy.

SFX was later revived and rebranded as LiveStyle, with HARD founder Gary Richards taking over as president of the company in the US in 2017.

That year, on the promoter’s website, it was suggested that TomorrowWorld could be similarly revived in the US and abroad. However, that never came to be.

Despite intense media and fan backlash at the time, it’s likely that many would still welcome the festival’s return. Imagine Music Festival has now laid claim to its old venue, but the US is a big place. And right now, we’d honestly welcome and event, even if it was like TomorrowWorld’s final day.

Listen to All Your Favorite Sets from Lost Lands’ Couch Lands

Listen to All Your Favorite Sets from Lost Lands' Couch Lands