Let’s clean up the image that gets splattered all over the dance music scene right now. The thing is, I can’t clean it entirely, because when Anthony Bourdain introduced his concept of “Douchedom,” he was right. I couldn’t help but to laugh along in agreeing with his point that was brought up in his Las Vegas episode of Parts Unknown with his guest Penn Jillette. Then I thought, “Dammit they are talking about me.” Not directly, because I know for a fact the bro-fisters and the raving sheep, who consistently need to have both hands in the air, are not groups I fall into.

Anthony is smart and empathetic enough to know there’s a respectable population of us dance music enthusiasts – and I think we can all agree any type of community has their fair share of douchery – so I didn’t take his unfavorable remarks personally. I’m happy to see where dance music has come, but I’m negatively affected and even disgraced by some of the things that “EDM” has put in front of people’s eyes. It’s an image of superficiality and self-loathing that’s poorly hidden behind a veil of careless freedom, drugs, PLUR and a four-to-the-floor beat.

Now, that veil has seemingly spread over the entire world with Las Vegas being one of the great hubs for the high-class, or privileged youngsters, of our society who go to the Sin City because one of their favorite DJs is performing. The increase in dance music based festivals has also increased throughout the world; with events like EDC and Electric Zoo going international, DJs are indeed the rock stars of my generation, but it’s been at a cost.

Dance music loses its integrity when it starts to go overboard, especially when moronic sects of the culture are expanding faster than the honorable ones are; at least, that’s how I’m seeing things. The festival coolies, the fiscally supreme, the careless headliners and the clubbers are all living too carelessly to even formulate any real conception of connection, aside from the most immediate, and therefore flimsy form of a bond.

If they can’t conceptualize a meaningful connection, they certainly can’t idealize the arts. Which is why Vegas is overrun with EDM fanatics who scurry past an open Penn & Teller show, without recognizing the names, only to end up in a line that’s got as many people jammed in it as a Disneyland ride, with the final destination being an electronically infused zoo and not a memorable experience. That’s “Douchedom” at a moderate stage too.

It’s become relatively common knowledge that the act of “Djing” isn’t too hard nowadays. Being a great DJ is a whole other thing entirely, but when anybody and everybody with a mixer in front of them is revered as a God, and all we want is essentially one type of experience everywhere we look, then something is wrong. Producers and fans sit in the shallow end spending money on ghost producers (can we rid of them please?) while true talent is being hidden and ignorance spreads like herpes in a whorehouse. Some may even say that’s what EDM has become. But dance music, I think that has a respectable form that is here to stay.

There’s an abundance of bullshit, mediocrity and negligence that’s expanding the EDM bubble along with money. There are also those of us who are attempting to shield as many good people as we can from the burst that seems as impending as the “end” of the Mayan calendar, though. I think after this anticipatory period we will have real results on our hands, and I hope we do. Not complete death or anything extreme like that. We just don’t need the whole world becoming a VIP lounge of alcoholics or a mindless mob of zombied suburbans. What we do need is a solidified, healthy culture.

By that I mean we need to be rich in our traditions and strict to principles that foster prosperity. True openness, understanding and pragmatism are just some of the things EDM needs. At this point, we can take music out of the equation and just exchange as one human to another. Not a raver to whatever it is that you reading this would like to label yourself.

Hell, I’m not even a “raver.” Besides for the fact that I have no money for shows, I don’t exhaustively try to get tickets to things because I just can’t continuously put myself into a usually musty compartment where I get to perceive Douchedom firsthand. And no, a molly isn’t going to help me with that. 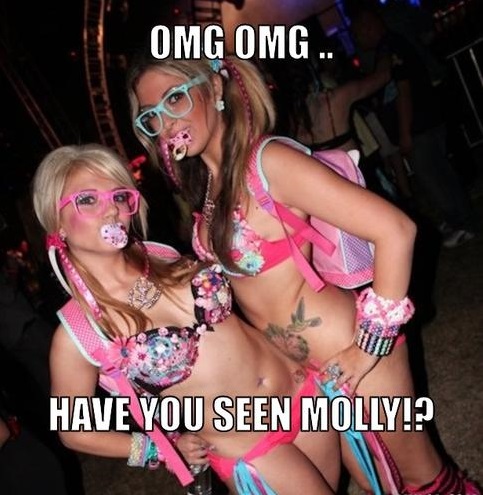 (I get asked this EVERY show)

What EDM needs goes beyond just the music and the culture, which has become largely based on “LET’S FUCKING PARTY.” If we only capitalize on how hard we can rage, we’re generating a platform for the new EDM generation to be the biggest YOLO of all.

Nevertheless, the historical base of dance music is wealthy; just look at the reverence Frankie Knuckles has received in passing with a street being named after him, as well as the President writing a letter to the Godfather’s friends and family because of his larger-than-life contributions to the world, and to music. In speaking of music, our record books are ridden with really good electronic records ranging from guys like the underground’s Prince Fox, to Feed Me, to classic figures like Tommie Sunshine. I’ll admit for myself that I even have a lot to learn.

However, our history is not without its cracks. Sketchy characters, unruly behavior and even deaths have tainted the waters of dance culture. A lot of shitty music has found its way into the scene too, especially at the most public of events that have become compromised. And of course, Douchedom is something we have on our plate.

With all the pressure from the new wave, it leaves open the opportunity for our structure to come crashing down. Let’s strengthen it by getting our priorities straight and our minds right. It will take active work, but those that actually care are probably already pushing for progress.

Those people are opening their minds to different styles. They explore various blogs and move from link to link continuously to find music. They share that music, whether it’s on social media or in real life with their friends and family. They support their artists. They boycott the phonies (after educating themselves on who they are). Even if they don’t like something, they don’t harp on it too much. If it’s not your thing, then it’s not your thing. If anything, discuss something, don’t bash… Okay, some things need a little smacking or even need a swift kick in the ass out the door. Especially if it is parasitic like ghost production on the part of the “artist,” money-driven blogs, or drug-fueled tommyrot on the part of the fans.

Some things certainly cannot be bashed. Take innovative acts like KOAN Sound and Random Rab who are pushing electronic music to unfathomable places. Not to mention guys like Gramatik, GRiZ and Flume and Haywyre who are ushering in (r)evolution. Their talents demand respect. They are bringing in fresh new ideas to production, and live shows. Even the Grammys have seen an influx of dance music producers playing live or winning awards.

Nowadays in dance culture, there are more party people than adventurers. Like I said, there will always be parts of a community that just don’t do justice to the larger culture, especially if it happens to be the “cool” thing to do, but EDM is getting a little out of control. The cattle are fed, the pimps are paid and the big shots hold their thumbs down on artists (Facebook reach and Soundcloud anyone?) to further the gap between the underground and the top.

For those of you who aren’t pushing for progress, and are actually reading this, I hope I (or Anthony) had the wherewithal to make you feel embarrassed enough to change your bad habits. EDM has problems; let’s stop ignoring them. I’m all for freedom and fun, but we must face reality at some point and give back some of the integrity dance music and its fans have lost.

After taking all this in, take in the Parts Unknown video. Take in the points Anthony Bourdain fosters and let them, along with the things I have mentioned, serve you as a reminder to be conscientious about how you, and others contribute to the dance music scene.

Also, I think this video will serve everyone well, even though it’s not music related. I think it’s appropriate.