Producers, event organizers, game designers, and DJs have created one of the most unique online spaces on a free social media game..

The Internet. You’re on it right now reading this article and it continues to connect people across the globe in fresh and innovative ways. This is especially true in 2020 as the COVID-19 pandemic continues to keep more people at home. With lockdowns and quarantines becoming the status quo, the world is more dependent on the web for work and leisure in an unprecedented manner.

This fact holds especially true with the music industry as live events have been postponed and moved over into the Internet. Despite a major effort by event organizers to return to hosting live events in a safe and successful way, the push for online shows continues to grow. For example, EDC Las Vegas and Tomorrowland streamed their individual virtual raves while garnering large online audiences this past summer. In these cases, both festivals filmed DJ sets from artists at dedicated DJ studios built for the event or shared streams from the artist’s home or own set-up.

Meanwhile, other artists and festivals have taken matters into more interactive spaces for online festival goers. While deadmau5, Dillon Francis, Steve Aoki, and Diplo have gone into the ever-changing battle-royale kingpin Fortnite to host their sets, Zedd, Disclosure, and Mat Zo have gone deep into the customizable blocky world of Minecraft to connect with fans. And recently, a group of dedicated players went and created “rave planets” in the space exploration game No Man’s Sky with terraforming and in game music. With all these event organizers, artists, and games becoming more creative and accessible for online audiences to interact with music, what’s next?

This is where VRChat comes in. Created by two game developers in 2014, VRChat is a free-to-play, massively multiplayer online social media platform that allows users to interact as 3D models in virtual reality. It allows players with virtual reality consoles and headsets to have avatars that support audio lip sync, eye tracking, blinking, and complete range of motion. But for those without an Oculus Rift or an HTC Vive, there is a desktop version of the game with limited functionality for the avatars. However, even desktop-only players have can still interact with other players and customize what avatar they can be and what rooms or spaces they will inhabit while playing minigames or just hanging out. 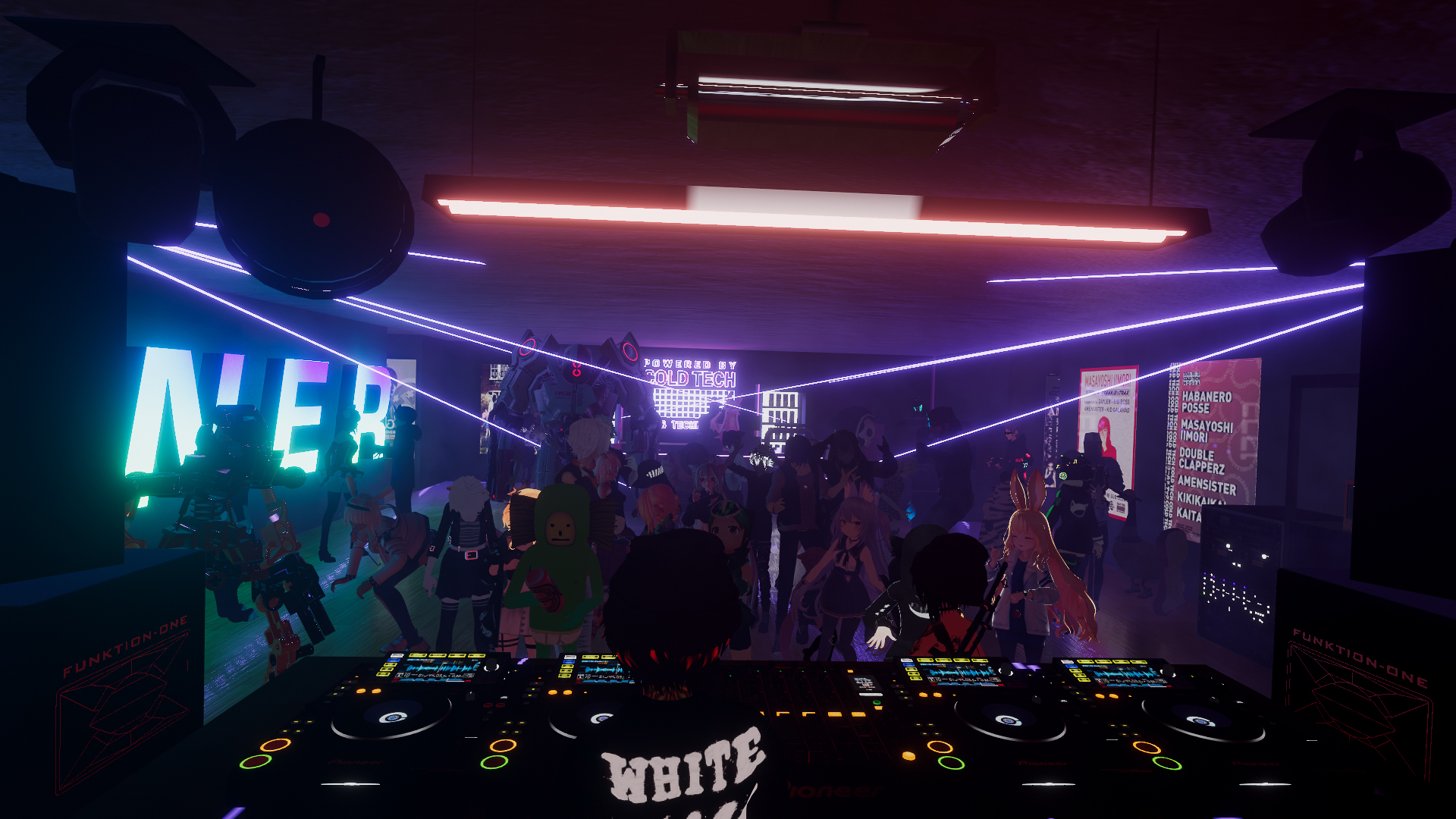 This is where LONER Online comes in. Originally a set of live shows hosted in Australia, LONER Online hunkered down as an online show with user-generated content originally intended for Garry’s Mod. When they became more serious, they settled to work with VRChat and began to create an online landscape that included live music with a nightclub aesthetic. What began as friends booking each other in a video game has grown into a bi-monthly event with about four musical acts with about thirty minute sets each.

“The event starts with the VR World opening 30 mins before the event, ” said Zeal; one of the organizers and founders of LONER Online. “The club entrance is blocked by an in-game bouncer while patrons wait outside like a regular nightclub in the parking lot. We spend this time setting up before the event kicks off, and our Twitch viewers can watch along during the event countdown from our livestream.” According to Zeal, patrons typically split up and enjoy the event moving between the lobby’s dancefloor, bar, bathroom, and parking lot. There are even Easter egg locations that are not obvious at first that users can explore to get more out of the space than meets the eye. 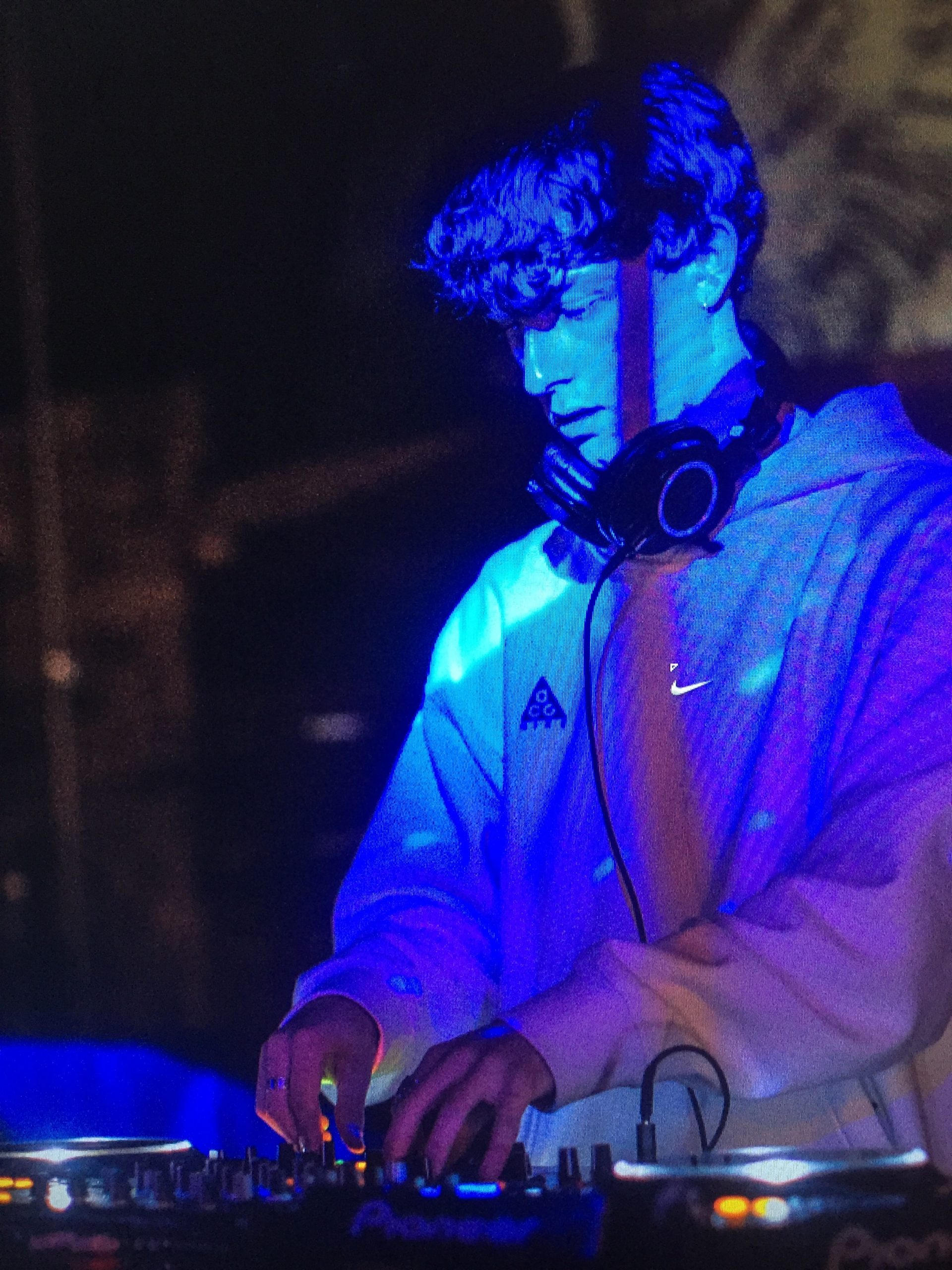 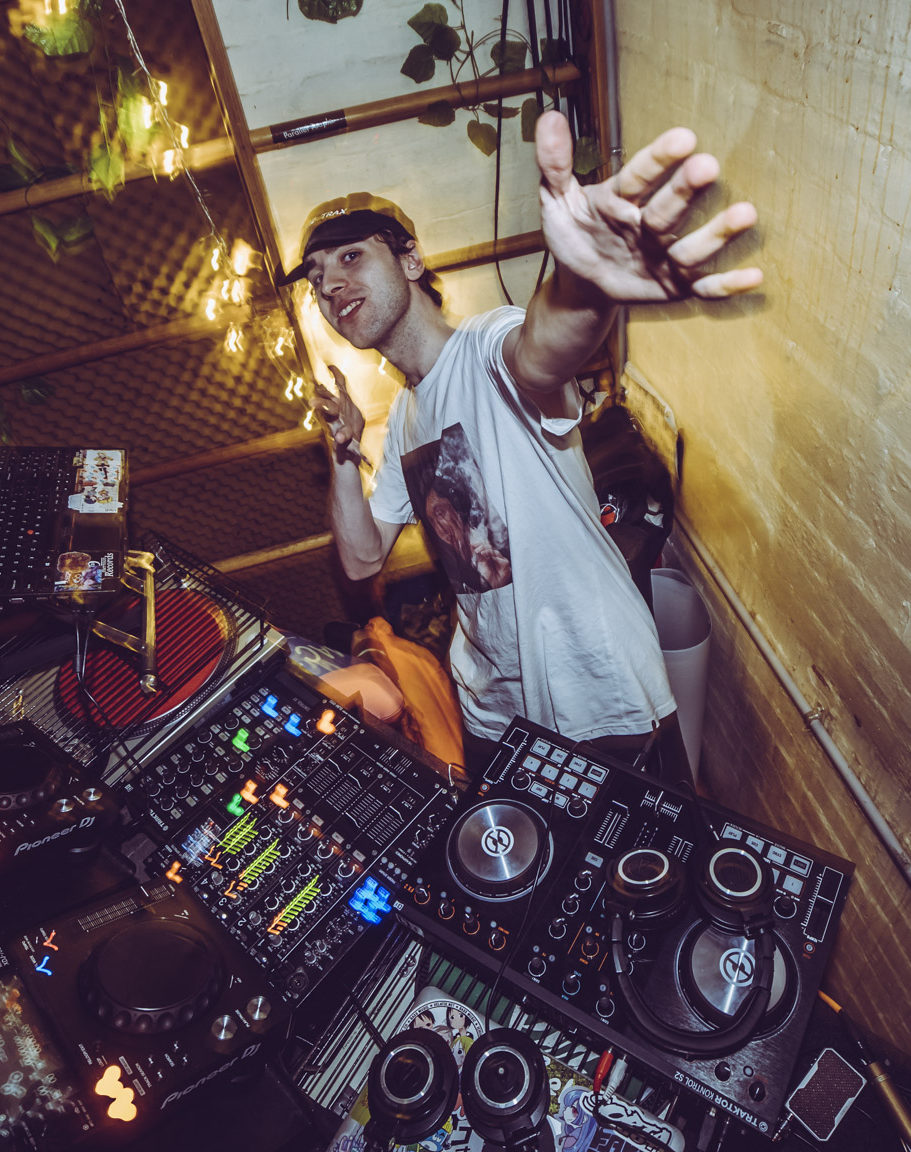 (from left to right: Zeal, Laces, and Velatix)

The team behind LONER Online is a community of passionate music producers, visual artists, and savvy promoters. Managing bookings for events are Zeal, Laces, and Velatix. The latter of the three was and is responsible for the world design of LONER Online. “We have Reka who does graphic design for the LONER brand and VJ Crims who does our live visuals,” says Zeal. “2ToneDisco and Clyde Machine recently joined as well over the past few months, really helping out with the backend stream work for Twitch. We have Illicitempress who does our social media, and other members of the Loner crew who support behind the scenes such as Kenta204, Outcry and m0ri.59. We also have Nick and Nathan who help edit and create videos for us.”

Compared to more lucrative and popular games like Fortnite and Minecraft that have taken virtual music festivals to massive heights, the LONER Online heads are crafting and curating a unique atmosphere within VRChat. This includes the way they designed their lobby’s basement dancefloor and it’s big sound-system, a grimy bathroom littered with sticker bombs and graffiti tags, a small bar users can pack themselves into and an inner city alleyway outside leading to a 7/11. “A lot of the VR music events that we’d seen went pretty overboard when it came to creating these crazy, ephemeral worlds with insane effects and stages,” said Velatix. “But ultimately, [they] missed out on giving their audience a personal, immersive experience. From the very beginning, I really wanted to capture that intimate, underground feeling present in small basement venues. So I decided to model most of the world on the real life layout of Sub Club [in] Melbourne and Mogra [in] Tokyo.”

But creating these worlds in VRChat is no walk in the park. Velatix explains how despite a near month of work to building the LONER Online world and configuring weekly updates, he still had to learn how to use the game’s engine Unity while another LONER comrade known as Sly did a complete backend overhaul to the game world. Even though this work can be more complex than making a special map in Minecraft, working on these small details is what the team strives for in order to cultivate this unique experience for their loyal audience. As Velatix puts it, “The idea behind emulating a real life space wasn’t purely just an aesthetic choice either; having a small basement space like this really amps up the immersion, ultimately encouraging the audience to be social and [to] actively participate.” 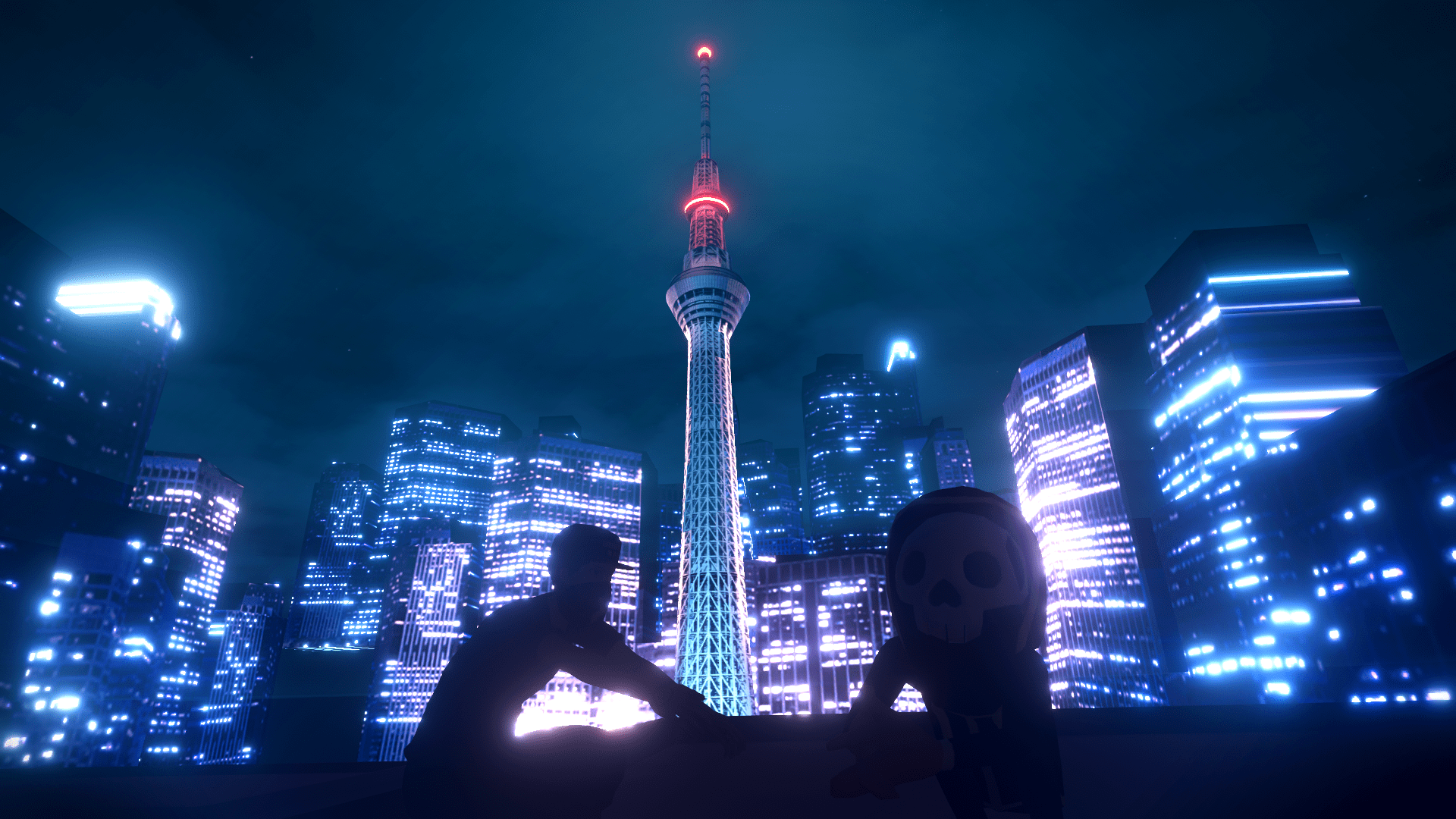 With the visuals and graphical tone set and rolling paired with a rotating roster of performing DJs, LONER Online events can feel niche. But that’s the point. “LONER Online comes from a history of running shows with a focus on internet club and niche online musical trends such as IDM, Jersey lub and hyperpop/PC Music alongside electronic dance mainstays like UK garage, bassline, bass music and DNB,” said Laces. “We try to cater to all kinds of audiences with a focus on energetic, forward-thinking and hands-on DJ performances.”

And, in a weird way, the shutdown of their own real-world LONER shows lead them to having acts part of the brand that previously weren’t conventionally available. “Our goal with our IRL [in real life] parties was to cater to the niche…but it wasn’t always possible to achieve this,” Zeal brought up. “With lockdown we were given a unique opportunity to try something that would have been deemed crazy and impossible beforehand, but we felt incredibly inspired with our discoveries inside VRChat and the possibilities the game gave us.”

But some hurdles present themselves before the LONER Online team as they rave through the Internet. For one, not everyone has access to virtual reality headsets. Although not required due to the game’s desktop mode and being free-to-play, an intimacy is lost on players who aren’t able to move or interact as their VR peers can. “VR events can be a little hard to get into considering the requirements like a powerful PC which can already set you back,” said Zeal. “If you wanted the full experience outside of desktop mode, then you need a VR headset to experience the event as it’s intended to be experienced. The Twitch stream manages to capture enough of it to make it about the music for people that aren’t into the gaming aspect, or can’t join in-game due to tech limitations.”

Another issue is the recent string of Twitch creators getting slapped with DMCA takedowns. Usually caused by licensed music being played during a stream, this problem has grown as more Twitch users been notified by the company that anything flagged as copyright infringement will be deleted without the ability to send counterclaims. What was once unregulated on the streaming giant has now become a major issue for streamers on the platform who have to now worry about the losing their content and possibly their channels.

“We definitively can’t rule out the possibility of eventually running into DMCA issues with Twitch and we’re aware that we’re treading on thin ice currently,” said Velatix. “Unfortunately, there isn’t really any kind of alternative or solution for us on the livestreaming front at the moment.” But that doesn’t seem to deter the LONER Online team as they concentrate on developing the best in-game experience even without a platform to stream on. The goal, as they put it, is to host great events.

LONER Online sits at the precipice of a new movement for online events. It connects people to a digital dreamscape that have been locked away from intermingling in the physical world. It allows it’s users to customize themselves endlessly and express themselves in ways they can’t in real world. Through VRChat and livestreaming, LONER Online could be leading the charge into a fresh take into how we continue to connect online as the world shuts down around us. And by the time the lockdowns and quarantines are no longer mandatory, we will become more integrated to the world wide web that there maybe more LONER Online clones and offshoots with their own successful growth. But pioneers like LONER Online have paved a way previously unseen because of three key components. Opportunity, connection, and music. 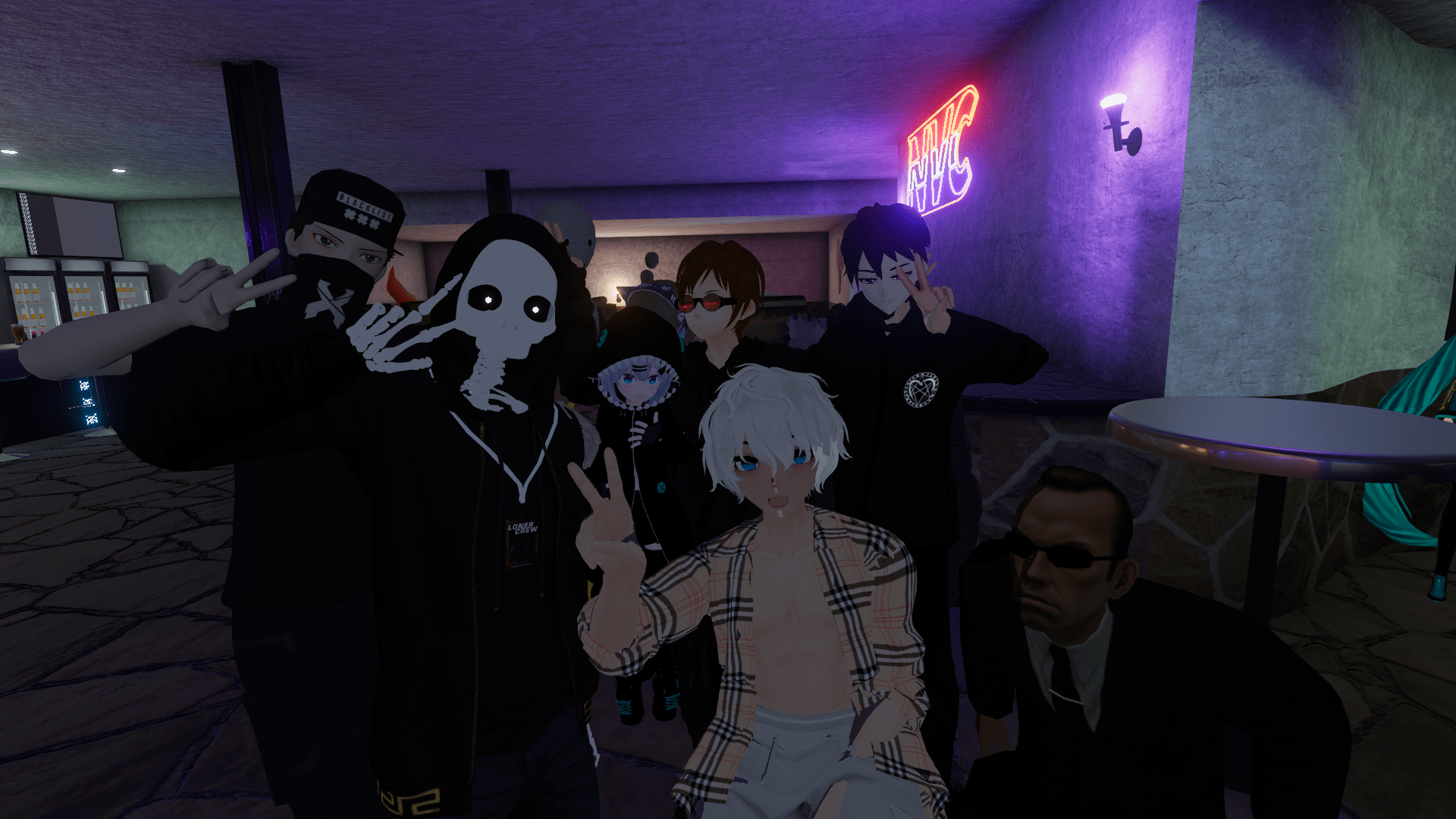 And their not stopping. LONER Online Vol. 20 will be their biggest event thus far. Four of the LONER Online team and three musical guests will showcase individual hour-long sets for a seven hour power stream. Taking place November 27th at 11 p.m. (EST), this will be an accolade for a team that has come a long way and has a longer road ahead. Click the link below to check out how to catch the show.

LONER Online presents our 20th event, a celebration of the incredible community we've built over the year.
Enjoy this look back on our past 19 events, and we'll see you this weekend for Vol. 20 ☹️https://t.co/CCjV46NXOf pic.twitter.com/FxBhdShKj5